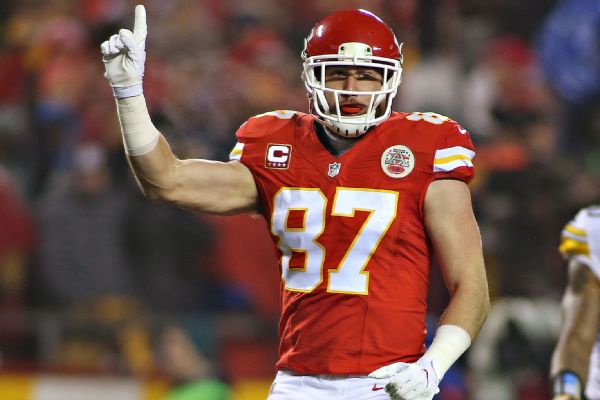 KANSAS CITY, Mo. -- Kansas City Chiefs tight end Travis Kelce has been fined a total of $21,615 for his actions during and after last week's 18-16 playoff loss to the Pittsburgh Steelers, a source confirmed to ESPN.

Kelce was fined $12,500 for his postgame comments about referee Carl Cheffers, who penalized Chiefs tackle Eric Fisher for holding on an otherwise successful two-point conversion that would have allowed Kansas City to tie the game with less than three minutes left to play.

The Chiefs failed to score on their two-point conversion attempt after the penalty.

"For it to end like that, with the referee literally taking it out of our hands, that hurts," he said. "You try to play this game with integrity, to the end of the whistle, and when the refs want to take over the game and make it their own platform, there's nothing you can do about it. That wasn't a hold on my guy Eric Fisher. I hope [Fisher] doesn't go the entire offseason thinking it was his fault. That was horse----, flat out.

"There was an unbelievable play called on the last drive. Alex [Smith] just drove us down there [to] fourth down, making plays, making plays. Momentum is getting on our side, and we just get our jugulars ripped out because the refs felt bad for James Harrison falling on the ground.''

A source confirmed to ESPN this week that Cheffers will be the referee for Super Bowl LI.

Kelce was also fined $9,115 for shoving Pittsburgh's Ross Cockrell to the ground after a play was over.