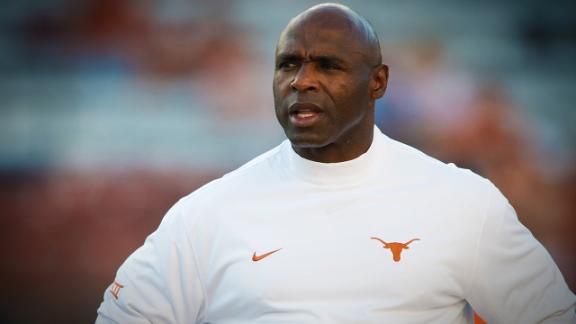 AUSTIN, Texas -- Texas coach Charlie Strong laughed Monday when asked whether he's going to be the next coach at Miami.

"I have the best job in the country," Strong said.

Hurricanes coach Al Golden was fired on Sunday, and sources told ESPN's Brett McMurphy on Monday that Strong is a candidate to replace him.

Two faces from Miami's past did express interest in the opening Monday. Former coach Butch Davis and safety Ed Reed both said in radio interviews that they'd be open to listening to pitches from the school.

"Obviously, I'd love to be considered for that opportunity," Davis, who was Miami's head coach from 1995-2000, said in an interview with 790 The Ticket in South Florida. "Time will tell whether that's the direction the school wants to go."

Reed, a two-time All-American for the Hurricanes (2000, '01), said in an interview with "The Rich Eisen Show" on Fox Sports radio that although he has no coaching experience, he'd be willing to listen if the school called with interest.

"I would definitely listen, would go and talk and want to know what they're looking to do. I would entertain it. I'm at a different place in my life right now, working out, training, coaching from afar, helping guys out, high school, college and pro alike. I definitely would entertain it," he said.

Strong, meanwhile, was asked again at the end of his weekly news conference to clarify whether he was interested in the Miami job.

"I've got a great job here," Strong said. "I've got to get things done here."

Strong is in his second season at Texas and has a record of 9-11. His Longhorns have rebounded from a 1-4 start with wins this month over Oklahoma and Kansas State.

"Each and every week, I'm the topic of conversation on [ESPN]," Strong said with a laugh. "There hasn't been one week that I wasn't. Either they're ripping me or saying I've lost my team or saying something else."

Strong does have ties to coaching in the state of Florida. He began his career as a graduate assistant at Florida and had three stints as a Gators assistant, including serving as defensive coordinator from 2003 to 2009. He also recruited heavily in Miami and the rest of the state while coach at Louisville.

Strong makes more than $5 million annually at Texas, which is twice as much as Golden was reportedly paid by Miami, and he has the full support of new Texas president Greg Fenves and interim AD Mike Perrin.