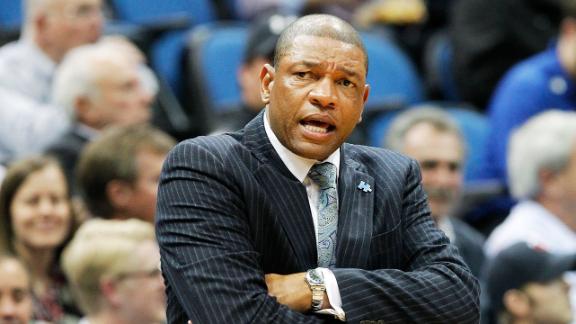 LOS ANGELES -- The interim CEO of the Los Angeles Clippers testified in state court Tuesday afternoon that coach and team president Doc Rivers has told him on multiple occasions that he doesn't think he wants to continue as coach if Donald Sterling remains owner of the team.

Dick Parsons said he has talked to Rivers, several players and key sponsors who are troubled by Sterling's continued ownership of the franchise, which is being adjudicated in a California probate court.

At issue is whether Shelly Sterling acted properly in selling the franchise, without her husband's expressed consent, for a record $2 billion to former Microsoft CEO Steve Ballmer. Parsons was called as a witness in the trial Tuesday to discuss the effect the continuing uncertainty over the ownership situation has had on the Clippers franchise.

"If Doc were to leave, that would be a disaster," Parsons said. "Doc is the father figure of the team. Chris [Paul] is the on-court captain of the team. But Doc is really the guy who leads the effort. He's the coach, the grown-up, he's a man of character and ability -- not just in a basketball sense, but in the ability to connect with people and gain their trust. The team believes in him and admires and loves him. If he were to bail, with all the other circumstances, it would accelerate the death spiral."

Donald Sterling's lawyers objected to Parsons' testimony on Rivers, arguing that only Rivers should be allowed to speak on his state of mind in this matter, and if that were the case, Rivers should be called as a witness. While Judge Michael Levanas agreed with the notion, he allowed Parsons to express his opinion on the matter and noted he would not consider it as fact.

Samini also cast doubt on some of Parsons' more dire predictions about the Clippers' financial stability should Sterling remain owner.

"I understand -- I'm just not seeing the sinkhole out here swallowing us all up," he said. "But that was the testimony Mr. Parsons gave."

Parsons said that although ticket revenue was essentially the same as the past season's, many of the team's 20 or so sponsors have made it clear they want to continue a relationship with the team only if Sterling is replaced as owner. He cited Mandalay Bay and Kia Motors as examples of sponsors who are "sitting at the edge of the pool and don't want to go in the water unless there is resolution" on the ownership situation.

Parsons said during cross-examination that only six or seven sponsors had explicitly asked to be disassociated from the Clippers following the scandal that enveloped the team after Sterling's racially insensitive comments were published April 25 by TMZ.com. The team gave the remaining two-thirds "a holiday" before they felt compelled to disassociate from the franchise.

"If none of your sponsors want to sponsor you, your coach doesn't want to coach you and players don't want to play for you, what do you have?" Parsons said.

Parsons and Bank of America expert Anwar Zakkour testified that the $2 billion price Ballmer agreed to pay for the franchise was much higher than the team's revenues justified under the most aggressive and optimistic predictions.

"Whether you want to call it a slam dunk or a home run, none of us believed we would get to the $2 billion," said Zakkour, who helped conduct the hurried sale. "None of us even believed we'd get to the $1.8 billion number, so that says it now."

Zakkour warned that if the sale fell through and the NBA restarted termination proceedings, there was significant risk the franchise would sell for far less.

"There are two things in my profession that are bad when you sell a franchise: uncertainty and transparency," Zakkour said. "I think there's been a lot of press speculation that he paid a very full price for the Clippers. The highest price ever achieved for a sports team, when you focus on just the sports team."

Zakkour mentioned that the Los Angeles Dodgers sold for $2.15 billion, but that deal included $300 million to $400 million in real estate.

Dean Bonham, a sports marketing expert called by Sterling's lawyers, testified the sale price could increase if bidding were re-opened.

"The NBA can have their vote any time they want if they think they can remove him as the owner," Samini said. "Donald Sterling came and said many times, 'I want the NBA to do it.' I think that's what he's waiting for. He's going to see if they're going to actually go through with that."

The probate court trial will resume Wednesday afternoon. Closing arguments are scheduled for Monday. None of the attorneys would comment on what transpired during a meeting with Ballmer and Donald Sterling on Monday afternoon, except to confirm that the meeting took place.

Asked about a possible settlement, Samini said, "Anything could happen, but I don't see it in the tea leaves right now."