Central Michigan wrongly gets untimed down, beats No. 22 Oklahoma State 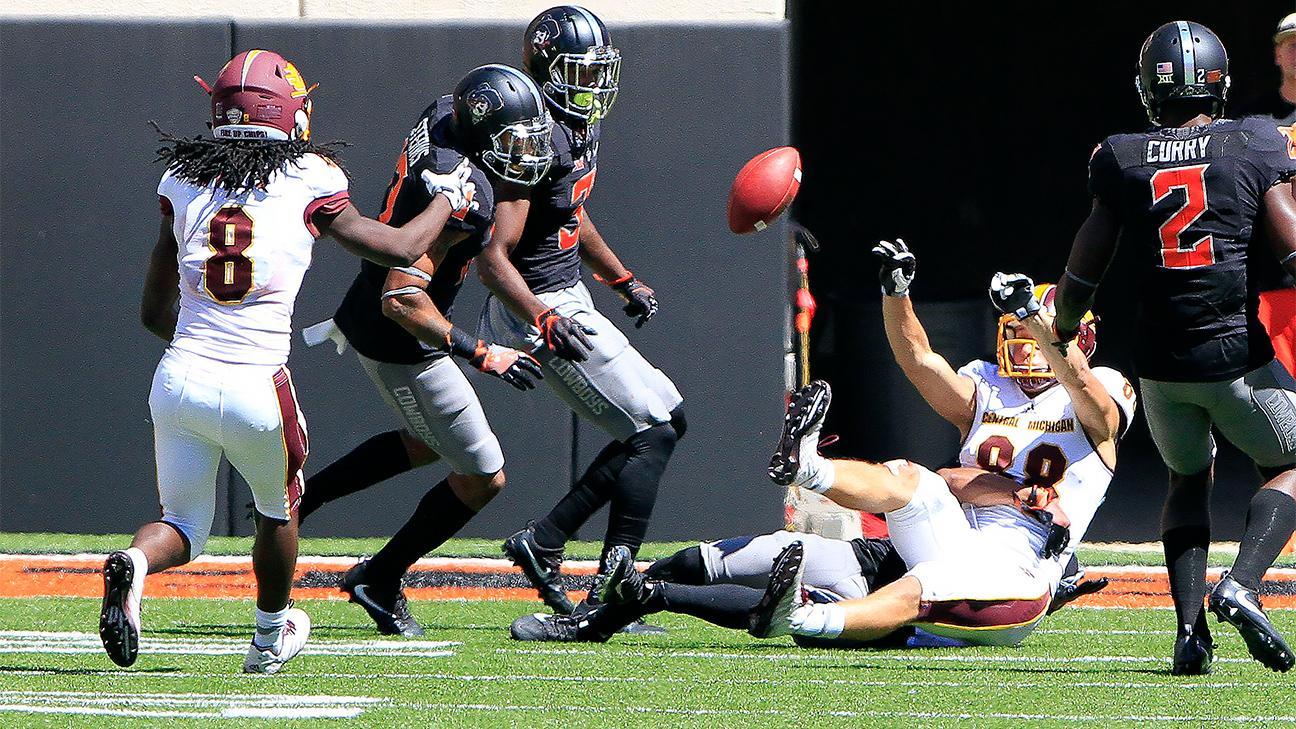 In one of the more improbable finishes to a football game, Central Michigan wide receiver Corey Willis grabbed a lateral from fellow receiver Jesse Kroll at the 12-yard line after a Hail Mary and raced into the end zone with no time remaining to stun No. 22 Oklahoma State 30-27 on Saturday.

It never should have happened.

Mid-American Conference referee Tim O'Dey -- as well as the MAC and the Big-12 conferences -- acknowledged after the game that Central Michigan was wrongly awarded an untimed down, which resulted in the miraculous Hail-and-lateral finish.

"I'm going to leave that alone. We had a play, we executed, end of story," Central Michigan coach John Bonamego told ESPN. "I'll leave it for everybody else to discuss."

With four seconds remaining, Oklahoma State quarterback Mason Rudolphthrew an incomplete pass to the left sideline to run the finalseconds off the clock for what seemed to be a 27-24 victory for the Cowboys (1-1). However, no receivers ran a route, thus resulting in an intentional grounding penalty on fourth down.

"That's a tough one. Just so everyone knows, I was the one who called the passing play," Oklahoma State coach Mike Gundy said. "To be honest with you, I never even thought of intentional grounding being called at that point in the game. As much time as we put into end-of-game situations, that never really crossed my mind. Unfortunately, that's a difficult way to learn a hard lesson."

Added Gundy later: "Even if the officials handled it incorrectly, it was still a dumb call on my part, regardless."

Since intentional grounding is a foul that includes loss of down, that meant Oklahoma State turned the ball over on downs.

"There's a rule that says that the game cannot end on an accepted live ball foul. That's the rule. There's an exception to the rule that says if enforcement of the foul involves a loss of down, then that brings the game to an end," O'Dey told a pool reporter.

"So in that situation, we've had the opportunity to run it back through our hierarchy, which includes the national rules editor, and he confirmed that should have been a loss of down and the end of the game at that point, so that extension should not have happened."

The rule in question is Rule 3, Section 2, Article 3.1 in the NCAA football rule book: "A period shall be extended for an untimed down if ... a penalty is accepted for a live-ball foul(s). (Exception: Rule 10-2-5-a). The period is not extended if the foul is by the team in possession and the statement of the penalty includes loss of down."

The Mid-American Conference issued a statement that the officiating crew was in the wrong, but the result of the game would stand.

"The Mid-American Conference officiating crew ... made an error on the final play of regulation," Bill Carollo, the coordinator of football officials for the Collegiate Officiating Consortium, said in a statement. "The crew made a misapplication of the rule and should not have extended the contest with one final play. Despite the error, this will not change the outcome of the contest."

MAC officials weren't the only ones in the wrong. According to the Big 12, Coordinator of Football Officials Walt Anderson said "the Big 12 replay crew missed an opportunity to stop the game to inform the MAC officiating crew of themisapplication of the intentional grounding penalty as time expired."

According to the Big 12, NCAA rules permit instant replay to "correct egregious errors, including those involving the game clock."

None of those explanations mattered to Oklahoma State athletic director Mike Holder, who issued a statement saying it's "incomprehensible" that the outcome can't be reversed.

"We were told there is nothing that could be done," Hoder said. "...The final score shows that Oklahoma State lost the game but that doesn't mean that I have to agree with it."

Bill Hancock, the executive director of the College Football Playoff, told ESPN on Saturday night that committee members "will be well aware of what happened on the field" when asked how they will assess the Cowboys.

"That ability to comprehensively consider each game is one of the most significant benefits of the CFP protocol," Hancock said.

CMU quarterbackCooper Rush lofted a Hail Mary pass that hit Kroll just inside the 10. As Kroll was being taken down, he pitched it back to Willis, who cut across the field and barely managed to score while being dragged down.

"To be honest, I actually had a missed assignment on that, I wasn't supposed to be right there, but it all worked for the better," Willis said. "We know Jesse Kroll is going to go up and get the ball every time; it's just something we practice all the time and we executed it."

Central Michigan fans might have had flashbacks to the Bahamas Bowl from two seasons ago, when the Chippewas covered almost the length of the field on a long pass-and-lateral play to score a touchdown and cut their deficit to one point with no time left against Western Kentucky. In that fabulous finish, Central Michigan went for the two-point conversion and the win but did not convert. This time, the Chippewas (2-0) were able to run off with one of their biggest victories ever.

"It's an improbable finish, but it's a situation that we practiced and rehearsed," Bonamego said. "We were able to execute and pull out the win."

The pool reporter asked O'Dey for clarity regarding the fact that the game should have ended and Central Michigan should not have been awarded possession:

"That is the interpretation from the rules editor -- the national rules editor, yes," O'Dey said, referring to Rogers Redding, the NCAA's national football rules editor.

When asked what might happen next, O'Dey would not say.

"I'm not at liberty to make any further statement as far as that," he said. "That falls outside of my jurisdiction."

Carollo, however, made it clear that the play could impact the officiating crew.

"As in all games involving the Mid-American Conference, every play within every game is thoroughly reviewed and graded on its accuracy and has impact on the evaluation for every official," he said.

ESPN's Heather Dinich, David Purdum and The Associated Press contributed to this report. 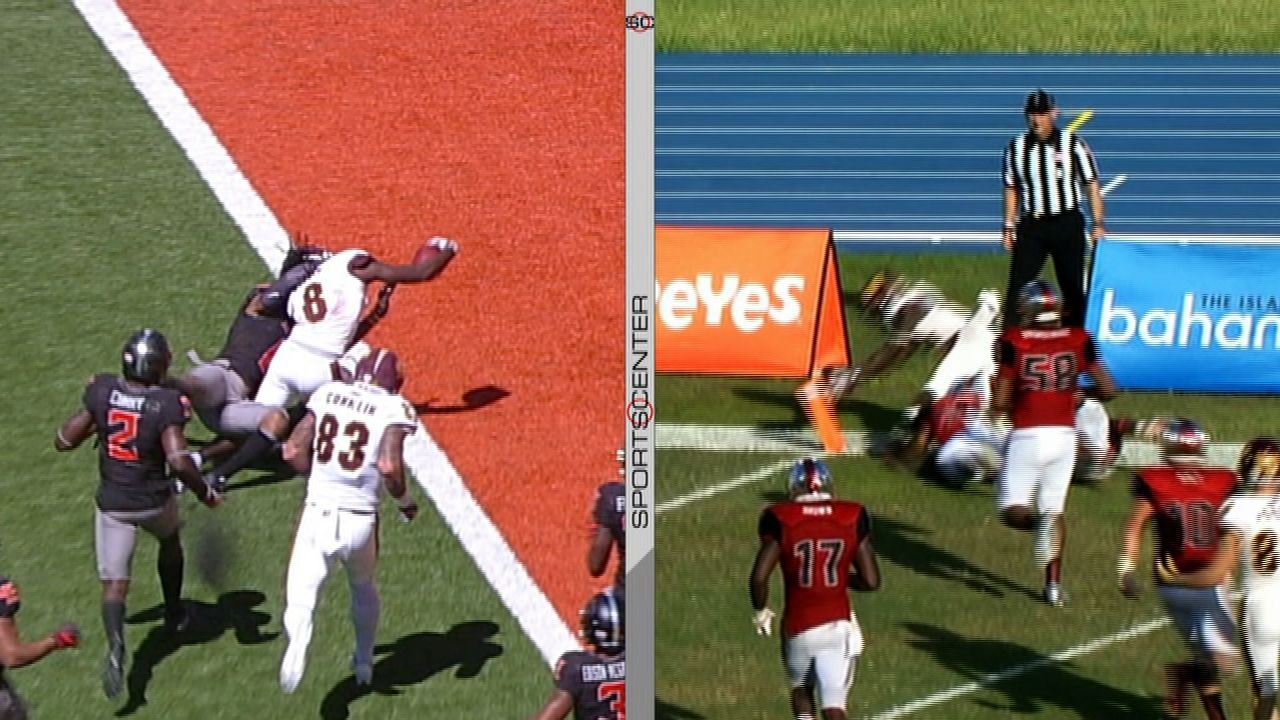