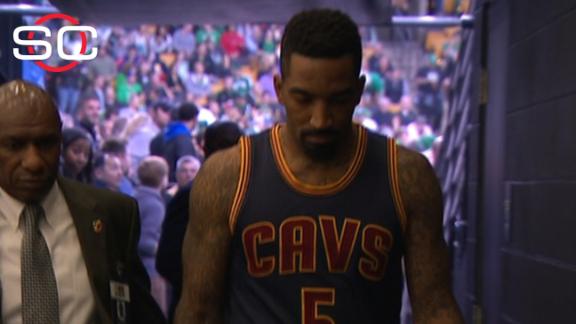 BOSTON -- The Cleveland Cavaliers' J.R. Smith was called for a flagrant foul 2 for striking the Celtics' Jae Crowder in the face and subsequently ejected with 10 minutes, 27 seconds left to play in the third quarter of Game 4 of their Eastern Conference first-round series.

The Cavaliers won the game 101-93 to sweep the series.

Crowder fell to the floor after the collision and had to be helped up by his teammates and ushered to the locker room for evaluation. On his way off the court, Crowder exchanged words with several members of the Cleveland bench.

"There was nothing malicious about it," Smith said of the contact after the game. "I didn't try to do anything to hurt him or anybody else. That's not the way I play the game, and unfortunately I got a flagrant 2, let my teammates down, and we still advanced, but still not a good feeling going into the next round."

Part of that ominous feeling has to do with the potential to be suspended for the play after a league review.

"I know I'm nervous as hell to see what could come out of this," Smith said. "This is a situation that I put my teammates in, and it's a selfish act because I don't want anything that we do collectively to be taken away by one individual, whether it's me or anybody else.

"So I'm nervous as hell. Hopefully it works out for the best."

"I want them to see the bumping and grinding from both ends," Smith said. "I mean, don't just look at it from one side because one person got hurt or whatever you want to call it. See both sides and try to make a decision off of that."

Smith has a history of playoff controversy with the Celtics. Two years ago to the day Sunday, Smith was ejected in the fourth quarter of the New York Knicks' first-round win over Boston for hitting Jason Terry in the face with an elbow and suspended for one game.

He expressed remorse about finding himself facing a suspension once again.

"I've been in this situation before in the playoffs, and it's not a good feeling to go into a new team, new situation feeling like you're coming on the up-and-up and to be quote-unquote back in this situation again is nothing I want to happen," Smith said. "And unfortunately, my team is going to pay for it more than anything."

Crowder suffered a left knee sprain when he fell after contact with Smith, according to the Celtics. The team said Crowder will undergo further testing, including an MRI, on Sunday night to determine the severity of what coach Brad Stevens dubbed "a lower-leg injury."

"The heart and the effort he puts in every day, his intensity, just his mindset of the grit and grind that he brings to the team -- it was tough to see him getting carried off like that," Jared Sullinger said of Crowder.

Celtics guard Evan Turner said he wasn't sure if Smith should be disciplined further.

"In the heat of the game, everything looks 10 times worse," Turner said. "And the emotion of it and what just occurred, I really don't know. The league is going to do what they're supposed to do."

Crowder joined the starting lineup for Game 4 in place of Marcus Smart, who was late to shootaround Sunday morning.

Crowder's injury was a continuation of the physical play that carried over from the first half. Cavs forward Kevin Love was knocked out of the game when he suffered a left shoulder injury on a play in whichKelly Olynyk was whistled for a loose-ball foul for pinning Love's arm.

Later in the first half, Cavs reserve big man Kendrick Perkins pushed Crowder to the floor when setting a pick for LeBron James with 1:44 remaining in the second quarter.

On the ensuing fracas, Perkins appeared to jab Crowder in the face with his left fist. He and Crowder both received technical fouls.

After a referee's review, Perkins was assessed a flagrant foul 1 for the play.

"I didn't go in with the intentions on sending no type of message," said Perkins, who rarely plays, making his substitution and subsequent involvement with Crowder seem like a retaliatory measure. "I'm just playing my game."

J.R. Smith will have to answer for altercation
Bruce Bowen breaks down the altercation between J.R. Smith, Kendrick Perkins and Jae Crowder in Game 4 of the Cavaliers-Celtics playoff series.