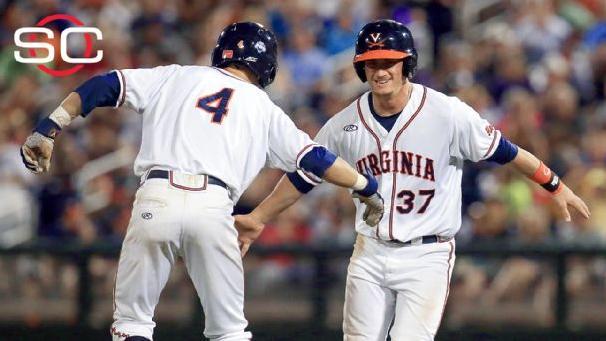 OMAHA, Neb. -- Big performances from a couple of unlikely sources and another shutdown relief performance from an old reliable allowed Virginia to force a winner-take-all game in the College World Series.

For the second year in a row, these two teams will go the distance in the best-of-three finals. Vanderbilt (51-20) will be playing for a second straight national title on Wednesday. Virginia (43-24) will be looking for its first.

"Adam Haseley rose to the occasion on the mound and just gave us a high-quality start,'' Cavaliers coach Brian O'Connor said. "Josh Sborz did what he's been doing this entire tournament, grinding out the back half of the game. And this guy here (Woodruff), I don't know when the last time he started a game, but certainly he put some great swings on the baseball and played some great right field. Just a total team effort."

O'Connor called on the freshman because he's short of starting pitching depth, and he had to hold back Brandon Waddell for a possible Game 3, which now will happen.

Haseley worked into the sixth inning for his longest outing and turned over a scoreless game to Sborz (7-2). Haseley gave up four singles, walked three and struck out one during his 71-pitch outing.

"I think it was a different kind of nerves than a regular game when I'm playing in the field,'' Haseley said. "Playing some games here before in the field, being out there and having playing time, did help.''

Sborz, who picked up his third career win in the CWS, hasn't allowed an earned run in 27 consecutive innings. He was tested Tuesday, with Vanderbilt getting its leadoff batter on base in the fifth, sixth, seventh and ninth innings.

The ninth was especially tense for Sborz after Bryan Reynolds singled and Will Toffey walked. But Sborz struck out Jeren Kendall, got Karl Ellison to fly out and struck out Nolan Rogers to end the game.

"The whole game they just battled and they were able to get my pitch count up,'' said Sborz, who won for the third time in this CWS. "I was trying to get out of it. If they scored, I wasn't going to get upset. I wanted to get this game over with and save the bullpen as much as possible.''

Vandy coach Tim Corbin said Haseley was mostly a mystery to him and his assistants.

"We had scouting reports on him, but he had only 10 appearances and four starts,'' Corbin said. "Usually he's a reliever, and he comes into a situation like that and stops a good offensive team. We really didn't do much against him. You have to give a lot of credit to a kid like that being on the mound (at the CWS) for the first time.''

Virginia broke through against Vandy starter Phil Pfeifer (6-5) for three unearned runs in the sixth after he had retired the first two batters.

Kevin Doherty got on board after his grounder up the middle bounced off second base and McCarthy reached when first baseman Zander Wiel couldn't handle his hot smash.

Ernie Clement followed with an RBI single into left, and Woodruff drove a ball into center for two more runs.

The Cavaliers have scored the go-ahead run in the sixth inning or later in each of their nine NCAA Tournament wins.

Clement, a freshman, and Woodruff, a senior who came into the game with only 67 at-bats in his career, combined to go 6 for 10 as the Nos. 8 and 9 batters in the order.

"It's definitely a little surreal,'' said Woodruff, who went 3 for 4. "The approach I take in practice is to treat it like a game. When everything is just like practice, the game slows down and you're confident in your abilities.''

Vanderbilt is trying to become the seventh school to win back-to-back national titles and the third to do it in the last 10 years. Virginia, with a win Wednesday, would be the first Atlantic Coast Conference team to win the baseball national championship since Wake Forest in 1955. 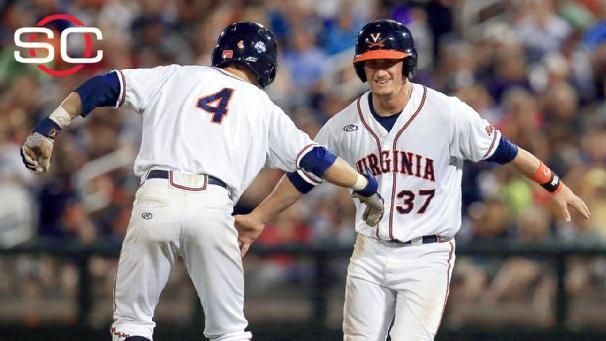