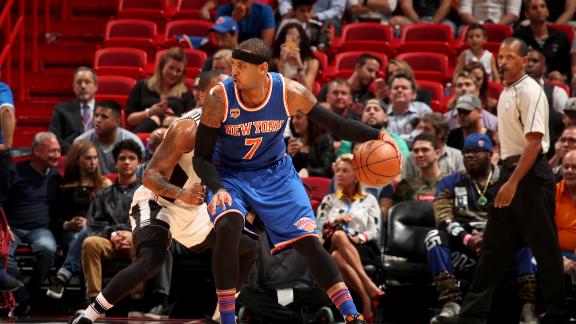 New York Knicks president Phil Jackson said Carmelo Anthonycan play the "role that Michael Jordan and Kobe Bryant played" in their teams' triangle offenses, but he believes that Anthony sometimes breaks a team rule by holding on to the ball for too long.

"Carmelo a lot of times wants to hold the ball longer than -- we have a rule: If you hold a pass two seconds, you benefit the defense. So he has a little bit of a tendency to hold it for three, four, five seconds, and then everybody comes to a stop," Jackson said in an interview with CBS Sports Network that aired Tuesday. "That is one of the things we work with. But he's adjusted to [the triangle], he knows what he can do and he's willing to see its success."

Jackson's comments were prompted by a question about whether Anthony can fit in the triangle offense. Jackson made it clear he believes Anthony can.

"He can play that role that Michael Jordan and Kobe Bryant played," Jackson said. "It's a perfect spot for him to be in that isolated position on the weak side, because it's an overload offense and there's a weakside man that always has an advantage if the ball is swung."

Anthony is playing well through the first 21 games of the season, averaging 23.5 points (43.6 percent shooting), six rebounds and 2.5 assists per game. He scored 35 points to help the Knicks beat the Miami Heat114-103 on Tuesday night.

"We're kind of a team that's learning who we are," Jackson said in the interview with CBS Sports Network, which aired before the club's win over the Heat. "... We're just starting to get a groove into who we are."

The Knicks play the Cleveland Cavaliers on Wednesday night, the first meeting between the two teams since LeBron James took offense to Jackson referring to his business associates as a "posse."

Jackson said that he regretted talking about another team's player when he made the comments about James in an interview with ESPN.com's Jackie MacMullan.

"We are not supposed to discuss other teams' players in this position that I have here. So I violated one of the tenets of our thing," Jackson said

In addition to addressing his comments about James, Jackson also shared his thoughts on the resistance to the triangle offense in the modern NBA. Jackson ran the triangle while winning an NBA-record 11 championships with the Chicago Bulls and Los Angeles Lakers. The Knicks, though, have struggled with the offense, winning a total of 49 games over the past two seasons. That lack of success has led to public backlash of the triangle.

"I think there are two reasons," Jackson said of the resistance to the offense. "One is it's always a little bit of a pie-in-your-face type of thing to say that this [the triangle offense] has been the reason for winning. The reason for winning, obviously, is good players. And when good players want to play together and they join in a form or a format to play together, then really good things happen."

"I think the other thing is, simply, it becomes something to attack," Jackson added. "And I think it's easy to attack it because it doesn't promote basic basketball that's being played now in the NBA, which is an open floor. Keep the lane open, allow the opportunity of guard play, screen roll play ... big men rolling the lane, and then 3-point shooting. But there's a place for it. It doesn't matter. It's still basketball and there's still a place for it."

The Knicks are running aspects of the triangle offense under first-year coach Jeff Hornacek, but scouts say that they are running it much less than the previous two seasons.

Hornacek confirmed this, as well, saying late last month that the Knicks were running the triangle "nowhere near 50 percent" of the time.

Some Knicks players expressed their displeasure over the offense earlier in the season, according to sources, because they felt it didn't suit their personnel, particularly point guard Derrick Rose, who has traditionally thrived when using pick-and-rolls.

Triangle aside, Jackson also gushed over Kristaps Porzingis, the player who has emerged as a rising star after the Knicks drafted him in 2015.

"He's a unicorn. He's just a standout guy. You don't see people like this playing basketball with the grace, speed and athleticism that he has. And the ability to shoot the ball as well as he can shoot the ball," Jackson said.

Porzingis is averaging 20.6 points, 7.4 rebounds and 1.7 blocks per game for New York. He was booed by some Knicks fans on the night Jackson and the team's brain trust selected him with the fourth overall pick.

"Kristaps turned out to be that unique player, that one that has things you just don't see on the basketball court," Jackson said. "He does things that are unique almost in every game. His size is defining. Defensively, he changes the game a little bit. He's still not a great strength player, post player. Offensively, he shoots 2-pointers, he can run the court; there's a lot of things he's still learning what he can do." 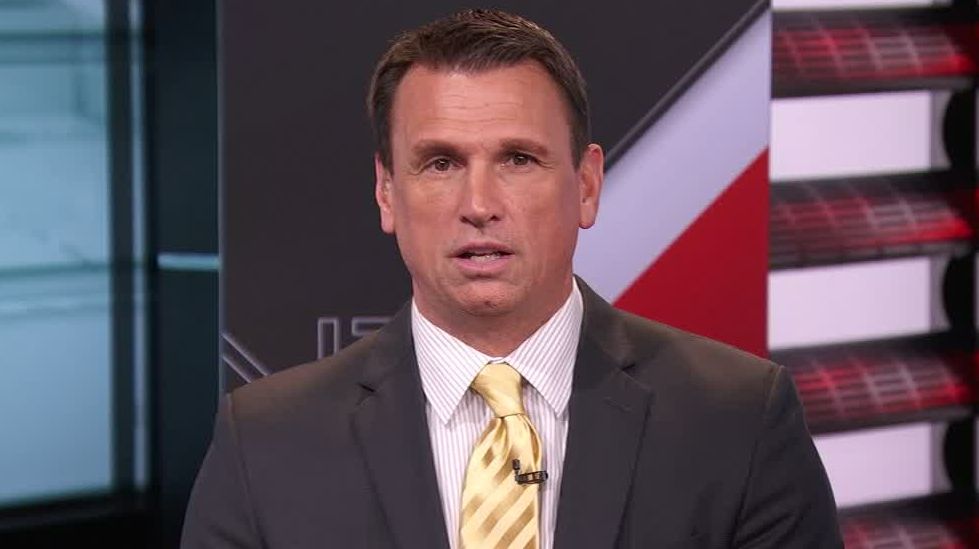 Odd timing for Phil's 'ball hog' comment to Melo
Tim Legler questions the timing of Phil Jackson's "ball hog" comments directed at Carmelo Anthony and thinks he runs the risk of upsetting Anthony and should be less vocal and let the coaches talk about the team.