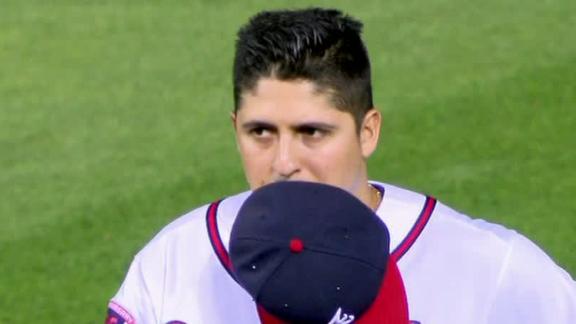 ATLANTA -- A boy who was struck in the head by a foul ball at Turner Field was visited in the hospital by players from both the Braves and Milwaukee Brewers.

The boy, who has not been identified but was said to be 8 years old, was sitting behind Atlanta's first-base dugout Tuesday night when he was hit by Carlos Gomez's liner in the seventh inning. Gomez looked toward the stands with concern, while Braves pitcher Julio Teheran crouched on the mound and grimaced. The boy was hustled up the aisle and later transported to a hospital.

The boy's family requested privacy and asked that neither his condition nor the hospital where he was being treated be released, though the Braves said shortly after the game he was "conscious and talkative."

Just went to see the young fan that was hit by my foul ball last night. He was in great spirits and I had a chance to sign the ball.

- Carlos Gomez (@C_Gomez27) May 21, 2014Two members of the Braves, third baseman Chris Johnson and catcher Gerald Laird, went to the hospital right after the game. The child was asleep but Johnson dropped off a bat signed by the entire Atlanta team, while Laird signed one of his gloves for the youngster.

"It's the least we can do as players," Johnson said. "He's a little kid. It was his first game."

Johnson said the victim was 8 years old. He was treated by medical personnel at the stadium before being taken to the hospital.

The Braves released a statement wishing him "a speedy recovery."

Teheran was clearly shaken by the incident, though he bounced back to pitch a six-hitter. Atlanta beat the Brewers 5-0.

"That was scary for me," Teheran said. "I knew it hit somebody. It was fast and hard. No one had a chance to get out of the way."

He sent his best wishes to the child.

"If anyone knows him, please let him know I hope he's fine," Teheran said.