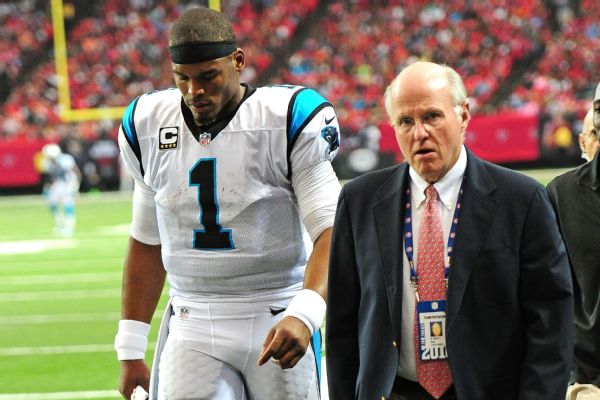 CHARLOTTE, N.C. -- Carolina Panthers quarterback Cam Newton returned to practice on Wednesday for the first time since receiving a concussion in the fourth quarter of a loss Oct. 2 at Atlanta.

Running back Jonathan Stewart also was back after missing the last three games with a hamstring injury.

Newton had a helmet and cleats and took first-team snaps during the portion of practice that was open to the media. Before taking the first snap, the NFL MVP hand-slapped everyone in the huddle and let out a loud yell.

Coach Ron Rivera said Newton brought a lot of energy to the practice.

"You get a guy back that is a big part of what you're doing, you can see guys gravitating [towards him] and really getting excited,'' he said. "He brings energy to what you do.

"Now he's trying to keep himself in check, obviously, because of the whole protocol. But you can see him enjoying it. He even took some of the scout team reps and played scout team quarterback as well. You could see him wanting to do more.''

Newton was listed as limited in practice, but took the first-team reps scheduled for him and also took scout team reps while Derek Anderson took first-team reps. The Panthers felt they needed to get Anderson some reps in case Newton has a setback before gaining full clearance.

Rivera said it was good to have Newton back on the field.

"This is the part where he's got to go out and work and see how he is,'' he said. "But he looked good. Threw the ball pretty doggone well. He was involved with the plays we had scripted for him. He handled those really well.

"We'll see. We're all waiting with bated breath to find out how he is tomorrow. That's all part of the protocol.''

Newton didn't address the media Wednesday, but could on Thursday if he is not experiencing symptoms and is given the final clearance to play Sunday at New Orleans.

"He took his regular No. 1 offense reps,'' Rivera said. "DA took some as well. We wanted to make sure just in case. Tomorrow is a big day as far as that is concerned. Until he's completely released [from the protocol] we'll continue to monitor what he does.''

Newton missed his third career start on Monday night when the Panthers lost 17-14 to Tampa Bay and dropped to 1-4. He did go through noncontact drills -- throwing and running -- before the game.

The Panthers are trying to bounce back from their worst start since the 2012 season, when they opened 1-6 record before finishing 7-9.

Saints coach Sean Payton said his team began preparing on Monday as though Newton will play.

"That's clearly the only way to approach it,'' he said. "Yet we understand the strengths and weaknesses of Derek [Anderson] and the other players that may or may not play on their team.

Newton threw five touchdown passes, including a game-winning 15-yarder to Jerricho Cotchery with 1:05 remaining, last season in a 41-38 victory at New Orleans.