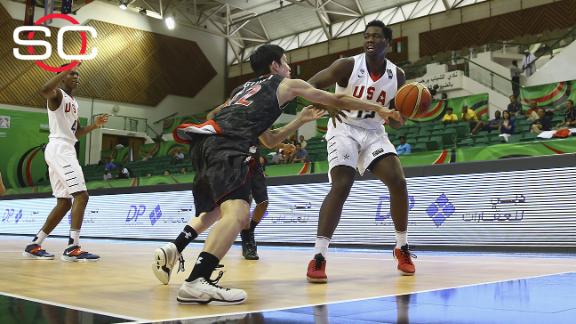 Caleb Swanigan, the best uncommitted player in the 2015 class, has committed to Purdue.

Swanigan, who decommitted earlier this month from Michigan State, chose the Boilermakers over the likes of Kentucky and California.

"He felt like it was the best basketball situation," Swanigan's guardian, Roosevelt Barnes, told ESPN.com. "He's Indiana Mr. Basketball, his high school team had never won a state championship before, and now he would like to win a national championship in the state of Indiana -- for a school that's never done it before."

Swanigan, a 6-foot-9 center from Homestead (Ind.), is ranked No. 9 in the ESPN 100. He joins a loaded frontcourt that includes returnees A.J. Hammons,Isaac Haasand Vince Edwards. Swanigan is capable of playing both inside positions, but has expanded his game to be able to contribute away from the basket, as well.

"You're talking about one of the best, and maybe the best, frontline in college basketball," said Barnes, who played football for the Boilermakers and the Detroit Lions and currently serves as an agent with Eugene Parker's Relativity Sports.

Purdue had been involved with Swanigan well before his commitment -- and subsequent decommitment -- to Michigan State, and kept the same pitch throughout his recruitment.

"They told us they were a good team already, a tournament team, and with [Swanigan] and the experience they have coming back, they could make a run to the championship," Barnes said.