Byron Scott: It's about winning titles 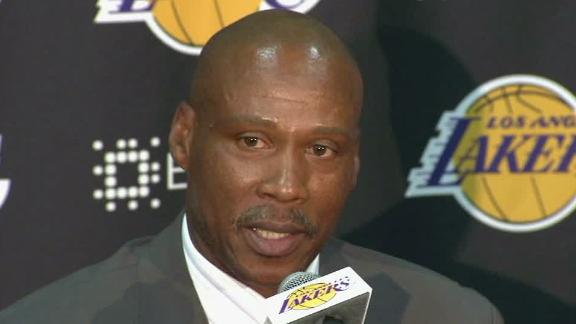 EL SEGUNDO, Calif. -- Before Byron Scott could say a word after being introduced as the chosen coach to carry the Los Angeles Lakers toward a hopeful championship future, several Hall of Fame voices from the purple and gold's past made a surprise appearance to weigh in on the hiring.

"Showtime's back, baby," Johnson said while pulling Scott in for a hug.

Scott, who played for the Lakers and won three championships from 1983 to '93 and again during Kobe Bryant's rookie season in 1996-97, was named the 25th head coach in franchise history.

"We came here today to support our brother and our former teammate and champion Byron Scott and also we're here to support the Laker organization," Johnson said. "This is a great day for all the former Lakers as well as Lakers fans all over the world. We're just excited for what Byron will bring to the table and get back to playing Laker basketball. ... We wish we could put on a uniform for you and help you, but we're here supporting you and will support you throughout. Again, congrats to the Laker organization. You chose the right guy."

Scott is the only one out of the six known candidates -- along with Kurt Rambis, Alvin Gentry, Mike Dunleavy, Lionel Hollins and George Karl -- who had multiple interviews for the coaching vacancy created April 30 when Mike D'Antoni resigned.

"I just want to thank him for his patience the last six or seven weeks," Kupchak said. "I think it was clear, at least it was clear to us, that Byron was always our first choice."

Scott grew up in Inglewood, California, home of The Forum, and has long wanted the chance to coach the Lakers.

"This has been a dream of mine for so long," Scott said. "It's a dream come true to be here sitting here talking to you guys today and be introduced as the head coach of the Los Angeles Lakers. ... The passion and the love that I have for this organization is second to none. The only thing that I regret is that Dr. (Jerry) Buss isn't here today because he's somebody who showed a lot of love, a lot of confidence in me back in the day."

The longtime Lakers owner died of cancer in February 2013. Johnson told reporters that Dr. Buss confided in him that he would have hired Scott as Lakers head coach in 2010 if Phil Jackson chose to retire, but Scott had already accepted a job the previous summer coaching the Cleveland Cavaliers. Jackson ended up coming back to coach the Lakers for one final season and L.A. replaced him with Mike Brown after he retired.

Scott, 53, said he hopes to get the Lakers back on course to add to their collection of 16 titles.

"This organization is all about championships," Scott said. "Period. We don't look at Western Conference finals, Western Conference championships, we look at [NBA] championships. And we know we have some work ahead of us, but I'm excited, I'm just thrilled to death, I'm eager and just ready to get to work, just ready to get to work. I know it's going to be a challenge, but I look forward to it. I love challenges anyway so this is going to be fun."

Before the Lakers can start getting sized for rings, they have to first worry about qualifying for the postseason. L.A. went 27-55 last season, missing the playoffs for the first time since 2004-05.

"I think the first thing you got to do is get them thinking like we used to think," Scott said. "Because everything to me is: if you're winning, it's contagious; if you're losing, it's contagious. So you got to change that mindset. That's the first thing we got to do. The first day of training camp is all about winning. It's nothing else. You don't think about losing. You think about winning. When you lose games, you shouldn't be sitting in the locker room having a good time. It should hurt. So, again, with those three gentlemen (Johnson, Abdul-Jabbar and Wilkes), when we lost games it was quiet as can be in the locker room because we didn't expect to lose. We got to get our guys thinking the same way. We got to get back to winning."

A big part of that plan will involve Bryant. Referring to the soon-to-be 36-year-old guard entering his 19th season, Kupchak said, "We still feel we have one of the best players in the NBA."

Scott said he could use Bryant some at point guard next season and expressed enthusiasm about teaming up with Bryant once again.

"I'm looking forward to coaching Kobe," Scott said. "I know his drive and I know his will and his determination. I think we're on the same page as far as how we think about this game and how it should be played. So, it's going to be fun. He has to be a little patient, we know that as well."

While Scott's hiring is a tip of the hat to the Lakers' "Showtime" era, Scott is not trying to replicate the same style of the teams he played on in the '80s.

"We can't play that way," Scott said. "We don't have a Magic Johnson. We can't get up and down the floor and have a guy that pushes the ball like he pushes right now, but my style is still the same. First of all, defense, we got to do that on a night-to-night basis. Offensively, we're going to get up and down the floor. We're going to spread the ball. We don't want it sticking as much as possible. And we're going to put our players to be in a position to be successful."

Scott has yet to fill out his coaching staff, but it is believed that Scott's son, Thomas Scott, who worked with the Lakers' D-League affiliate, the L.A. D-Fenders, last season, as well as Paul Pressey and former Laker Robert Horry are candidates. Scott could also retain Mark Madsen, Larry Lewis and Johnny Davis as holdovers from D'Antoni's staff. Johnson lobbied for Scott to consider former Lakers great Michael Cooper as well. Cooper, coach of the WNBA's Atlanta Dream, is currently recovering from mouth cancer surgery.

"If it was any other coach we probably all wouldn't be here," Johnson said after the press conference. "So, that shows you the type of pride we have in Byron."