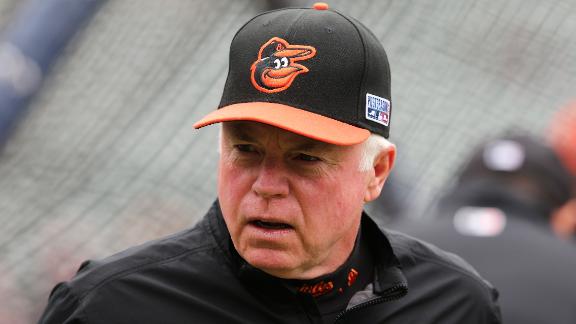 Showalter received 25 of 30 first-place votes and 132 points in balloting by the Baseball Writers' Association of America. He kept up his pattern of winning the award once a decade following victories with the New York Yankees in 1994 and Texas in 2004.

"I won't be doing it 10 years from now,'' Showalter said on the MLB Network telecast.

Showalter guided the Orioles to a 96-66 record and their first AL East title since 1997. Voting took place before the playoffs, where Baltimore swept Detroit in the Division Series and then was swept by Kansas City in the AL Championship Series.

Until the ALCS, the Orioles had not lost four in a row since May and had not dropped consecutive home games since June 28-29.

Schowalter and the Orioles had to overcome key injuries to catcher Matt Wieters and third baseman Manny Machado this season. First baseman Chris Davis was suspended 25 games that carried into the postseason for a failed drug test.

"It's such a great reflection on our organization,'' Showalter said. "It's pretty humbling."