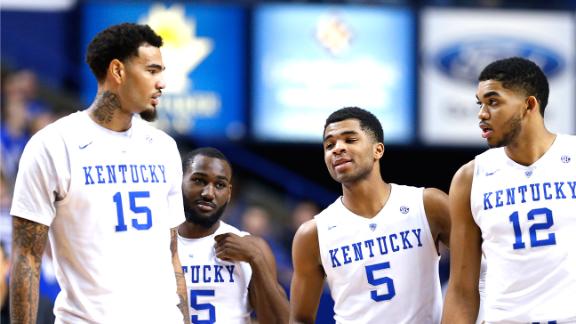 SMUcoach Larry Brownknows basketball. The 74-year-old self-described "junkie" has coached at all levels and is the only man to have won both an NCAA national championship and an NBA title.

He also knows Kentucky Wildcats coach John Calipari, who was an assistant under Brown with the Philadelphia 76ers.

So when Brown says that Calipari's Wildcats, who are 34-0 entering NCAA tournament play and have won by an average of 20.9 points per game, are good enough to be an NBA playoff team, one takes notice.

"I don't want to put pressure on John," Brown said Wednesday. "I feel real close to him. I'm so proud of what he's done. I think they'd honestly make the playoffs in the Eastern Conference if they were in the NBA."

Kentucky, which needs just one win to tie the 2013-14 Wichita State team for the longest win streak to start a season in NCAA history, opens NCAA tournament play Thursday night against Hampton.

It's not the first time this season that a coach has said that of the No. 1 Wildcats, who are bidding to become the first team to go undefeated since the 1976 Indiana Hoosiers. Chris Briggs of perennial NAIA power Georgetown College said the same thing after Kentucky crushed his team 121-52 during an exhibition game before this season.

"I knew they were good coming into this game, but sitting out there watching it on the sideline, honestly I don't see how they're going to get beat this year," Briggs forecast on Nov. 10. "I don't like to say that, because I know people have off nights, and things can happen and this and that, and injuries and things like that, but if they play like they did tonight, they're an NBA playoff team."

Calipari was quick then to pour water on that statement.

The Boston Celtics and Indiana Pacers both have 30-37 records and are vying for the eighth and final playoff spot in the NBA's Eastern Conference along with the Charlotte Hornets (No. 10, 29-37) and the Brooklyn Nets (No. 11, 27-39).

Meanwhile, the New York Knicks (14-53) and Philadelphia 76ers (16-52) are bringing up the rear of the Eastern Conference standings.

Brown, whose Mustangs are a No. 6 seed in the South Region, said Wednesday that he's enjoyed watching how Calipari has handled his team this season.

"I've been so impressed with the way they defend and the way they share the ball and the way they don't have an ego," Brown said. "It reminds me a lot of Tark's [Jerry Tarkanian's] teams. Tark was so underrated in my mind about what he did on the defensive end and how he got kids committed to do what they did best. For the sake of the team, and I think John's been able to do that.

"But you have to be lucky. You don't win a championship unless special things happen. My first year at UCLA, we make the layup, we win the national championship. When I was at Kansas, if Archie Marshall doesn't go down with a knee injury, we might have won three. You've just got to be fortunate.

"But I think in order for somebody to beat Kentucky, Kentucky has to play as poorly as they can possibly play, and somebody else has to play great because they defend so well. They rebound the ball so well, and [Calipari has] got them playing as a team. It's going to be a test for anybody."

Brown: Kentucky Could Make NBA Playoffs
Stephen A. Smith and Skip Bayless react to SMU coach Larry Brown's statement that the Kentucky Wildcats would make the NBA playoffs in the Eastern Conference.