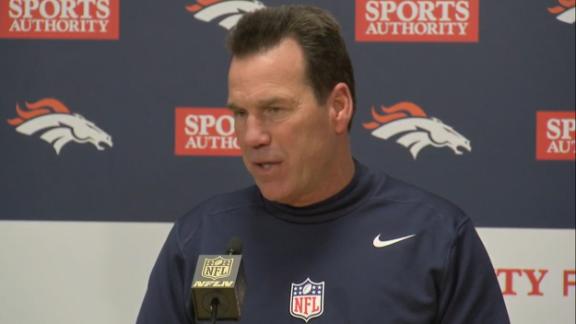 DENVER -- Peyton Manning handed receiver Demaryius Thomas the game ball after theDenver Broncos' comeback playoff victory over thePittsburgh Steelerson Sunday and told him to give it to his mother.

"So that is what I'm going to do." Thomas said as he hurried out of the locker room to the family waiting area after the Broncos' 23-16 win.

Sunday was the first chance Thomas has had to do that because Sunday's game was the first game Thomas' mother, Katina Smith, has ever seen him play in person.

Arrested and jailed for narcotics trafficking when Thomas was 11 years old, Smith was freed in November when President Obama commuted the sentences of 46 nonviolent drug offenders.

But per the terms of her release, Smith was not allowed to travel outside of Georgia for 60 days. That led to some frustration and disappointment, as Thomas was eager to get his mother to a game. On Sunday, it finally came to pass.

As the questions kept coming, Thomas, who caught four passes for 40 yards and one 2-point conversion in the victory, gripped the football, grinned and shook his head.

"My mom is right outside that door," he said. "Y'all are killing me."

He found her outside that door, in the family waiting room off the Broncos' locker room, in a sparkly, bright orange Broncos cap and a bright orange jacket covering a custom-made, bedazzled Broncos jersey with Thomas' No. 88 on it and the words "Bay Bay's Mama" on the back. They hugged. He handed her the ball. They walked out to the parking lot with his arm around her shoulder, stopping to trade hugs, handshakes and wide smiles with Thomas' teammates.

"Just excited she was here for her first game," Thomas said. "The fact that we came out with a win made it even better."