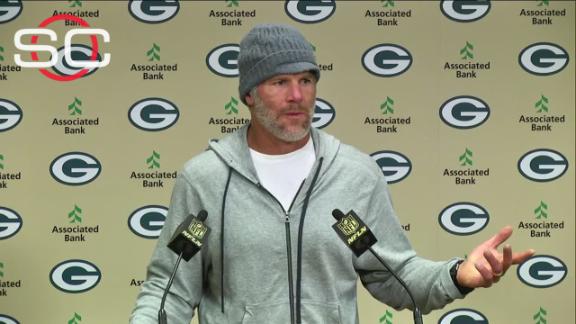 GREEN BAY, Wis. -- The Packers celebrated not one but two legendary quarterbacks from their storied history Thursday night: Brett Favre by unveiling his retired No. 4 on Lambeau Field's north end zone facade, and Pro Football Hall of Famer Bart Starr, who returned to the iconic stadium for the first time since suffering multiple strokes and a heart attack in the fall of 2014.

And this much was clear: Packers fans still love them both with all their football hearts.

"I know we have to be quick, we have to finish this game, but it is Thanksgiving and we have so much to be thankful for," Favre said. "And as I think back to our time here in Green Bay, I certainly thank God for the opportunity to play a game I love and play it for a long time and in the best place to play football in the world."

After Favre finished his short thank you, Starr emerged from the tunnel riding in a cart alongside his wife of 61 years, Cherry -- clapping and waving as he rode. When he arrived at the stage, Favre and Starr embraced and shared a short conversation.

"I felt compelled to include him," Favre said later at a news conference. "And this started back last year; it didn't work out. I think about the same time as this. So we really set the plan in motion for this year. Obviously, time is not on his side. But we held out hope, and Bart Jr. and Cherry and their entire family was determined to get Bart back. I think it was the right way to do it. Didn't have to do it, but I wanted to include him in this whole atmosphere."

Favre said it meant a lot to have Starr here.

"As I saw Bart earlier today, first time I'd seen him in I couldn't tell you how long, I was worried. I was worried," Favre said. "But that was a totally different man. I talked to Bart Jr. right before, I saw him here, but I didn't get a chance to see him up close, and I said, 'Is your dad ready?' And he said, 'Oh, he's ready.'

"So you're thinking, 'Hmm ... OK.' But he was gritting his teeth, I mean ... it was awesome. I got more of a thrill out of that than what I was here for. To see him ... and I mean no disrespect that way, but to see him that excited at 81 years old was pretty awesome."

Seven years after a bitter divorce left both sides wondering whether their relationship would ever be the same, there was no doubt Thursday night that even if all isn't forgotten with Favre, all is most certainly forgiven.

The team and a sellout crowd celebrated Favre's 16-year career in green-and-gold with Starr in attendance and current star signal-callerAaron Rodgersleading the Packers against the Chicago Bears in Green Bay's first Thanksgiving game at home since 1923. The Packers lost 17-13.

Rodgers and Favre embraced at the 10-yard line as Favre was walking off the field and Rodgers was coming back out for the second half.

Favre had returned to Lambeau Field on July 18 for his induction into the Packers Hall of Fame and to have his No. 4 officially retired. That day, Favre entered the stadium to 67,000 fans who gave him a two-minute standing ovation, and he delivered an induction speech filled with humor, tears and quintessential Favre storytelling.

It was hard to imagine such a night happening during the summer of 2008, when the team and its most iconic player were at odds following Favre's decision to unretire.

He was eventually traded to the New York Jets for what would turn out to be a third-round draft pick, and thus the long road back began: one season in a different shade of green; his second retirement and subsequent request to be released by the Jets; joining the archrival Minnesota Vikings; two virtuoso performances in victories over his former team during the 2009 season; two far less impressive efforts in a pair of losses to the Super Bowl-bound Packers in 2010; lingering hard feelings in the years that followed his final, this-time-I-mean-it retirement; an on-stage handshake with his successor, Rodgers, at the 2013 NFL Honors ceremony that proved to be the catalyst for the reconciliation; and a slow, steady, memory-fueled rekindling of the love affair between a one-of-a-kind player and the unique, community-owned football franchise.

Then came Thursday night, when all was right with the world -- except the uncooperative, cold and rainy weather.

Hours before the game, Favre was presented with a key to the city

But back at Favre's home in Hattiesburg, Mississippi, the monumental event barely registered in his household. Speaking at a Thanksgiving luncheon for the Rawhide Boys Ranch, a charity Bart and Cherry Starr helped start almost 50 years ago, Favre said the significance of it all didn't hit him until he arrived in Green Bay on Wednesday.

"I never really thought about it," Favre said. "No one wants to hear around our house what I did. I don't walk around saying, 'Hey, I was pretty good.' No one cares, because two nights ago I was taking out the trash. I was carrying the trash out, and I was like, 'I'm getting ready to have my jersey retired, and here I am taking out the trash.' Oh well.

The Falcons' third-stringer in 1991, Favre was acquired from Atlantaby recently enshrined Pro Football Hall of Famer Ron Wolf for the Packers' first-round pick in 1992. He proved to be the perfect fit for pro football's tiniest outpost, and he went on to author one of the greatest careers in NFL history. In 16 seasons in Green Bay, Favre set most of the league's most meaningful quarterback records, including for passing yards, touchdown passes and quarterback victories. He also won consecutive NFL MVP awards in 1995, 1996 and 1997, and led the 1996 team to the Super Bowl XXXI title, the once-proud Packers' first championship after a 29-year drought.

Favre on number retirement: 'It was a special night'
Brett Favre reacts to having fellow former Packers QB Bart Starr attend his number retirement ceremony and discusses how he felt throughout the event.

Favregiveness
A look at the love/hate relationship Packers fans have with Brett Favre in anticipation of his jersey retirement. A "time heals all wounds" mentality is shown as Packers fans go to the confessional of longtime fan "St. Vince" at Brett Favre steakhouse. 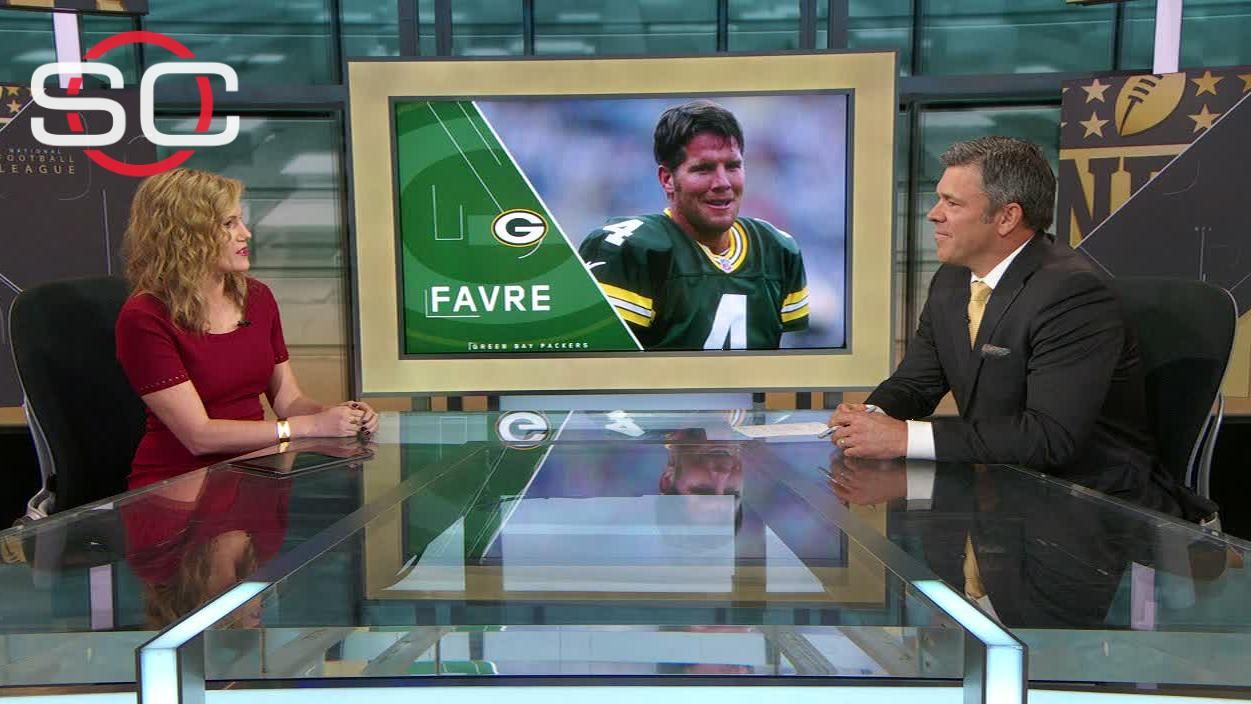