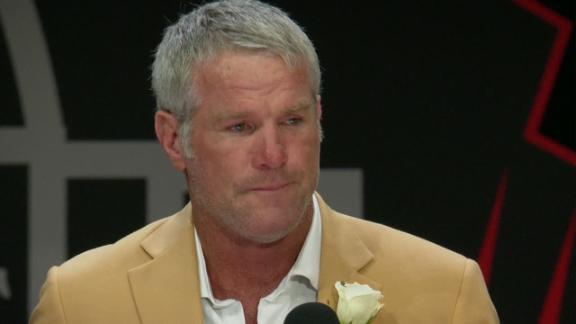 CANTON, Ohio -- With his late father foremost on his mind and his wife, Deanna, as his presenter, Brett Favre cemented his place in football history on Saturday night.

His bronze bust will be forever placed next to Ron Wolf, the former Packers general manager who swung the trade to bring Favre to Green Bay from Atlanta in 1992.

Wolf, inducted here last summer, watched Favre's off-the-cuff speech, which he described on Friday as "much like the way I played ... 'Who in the hell knows?' But it worked out pretty well in my career."

Favre said he wanted to make sure he honored his father, Irv, who died in 2003 on the eve of one of his greatest performances: a 399-yard, four-touchdown game against the Oakland Raiders on Monday Night Football.

"It's no secret how important he was to my life and to my career," Favre, whose dad coached him in high school, said on the eve of the induction. "There's a lot of people who were important to my career that made a difference in my success, but none more important than my dad. So I want to make sure I get that across."

Favre would have wanted Irv to present him had he not died at age 58. Instead, his wife performed the honor.

"She was there long before my first touchdown pass and long after the last," Favre said Friday. "So it was an easy choice."

A first-ballot selection, Favre, 46, retired -- finally -- in 2010 after 20 seasons. Sixteen of those came in Green Bay, where he helped resurrect a franchise that was without a title since the Lombardi era until Favre and Co. won Super Bowl XXXI. He was inducted into Packers Hall of Fame last summer and his retired No. 4 was unveiled on the Lambeau Field faade on Thanksgiving night last year, with one his idols, Bart Starr in the house.

That event served as the final mend between the Packers, their fans and Favre, who originally retired in 2008 only to change his mind later that summer. General manager Ted Thompson then traded Favre to the New York Jets. He retired again after one season only to come back and play two more seasons for the Minnesota Vikings.

Thompson was in the crowd Saturday and led a contingent of Packers that included quarterback Aaron Rodgersandkicker Mason Crosby, who arethe only two current Packers who played with Favre, and coach Mike McCarthy.

"It just sends tingles up your spine," Thompson told ESPN.com as the ceremony began. "It's almost like a home game for the Packers. Just listen to this [chant of 'Go Pack Go']. This means so much to all these people, to us, to Brett and his family.

The NFL's iron-man quarterback started a record 297 consecutive regular-season games. It began when he replaced Don Majkowski in the Packers' starting lineup on Sept. 27, 1992 and ended on Dec. 13, 2010, when the Vikings turned in their pre-game inactive list with No. 4 on it.

Along the way, the free-wheeling Favre threw for an NFL-record 71,838 yards and 508 touchdowns, marks that were later eclipsed by Peyton Manning. He still holds the record for most career interceptions (336). Favre won all three of his Most Valuable player awards in succession (1995-97) with the Packers.