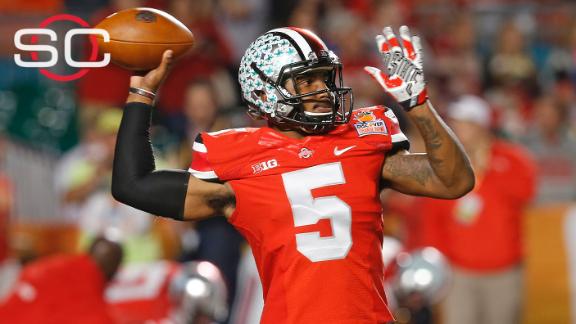 Ohio State's Braxton Miller has endured two shoulder surgeries, missed the entire 2014 season and is mired in a quarterback controversy, but he said Thursday he remains one of college football's best.

"As it stands right now, I know I am the best athlete in college football," Miller told The Columbus Dispatch. "If any competition wants to come my way, I've just got to be smart about things and just stay looking forward."

A two-time Big Ten offensive player of the year, Miller said he is nearly 100 percent recovered from a season-ending torn labrum he suffered last August, but he doesn't yet have full rotation in his right arm.

"That comes with repetition," he said. "Other than that, I'm healthy."

J.T. Barrett took over for Miller, starting 12 games and breaking Miller's single-season record for total offense, but suffered a season-ending broken ankle in a Nov. 29 win over Michigan. After Barrett's injury, Cardale Jones took over and led the Buckeyes to three consecutive wins and a national title.

Because of that quarterback carousel, rumors swirled that Miller might transfer to another program, but a source close to Miller told ESPN's Joe Schad last week that Miller had affirmed his plan to remain at Ohio State.

"Schools reached out," Miller said Thursday. "They reached out hard, and I kept my head where it needed to be, and I stayed smart with my situation."

Added Buckeyes coach Urban Meyer: "He always loved Ohio State. That's why when I heard this stuff going on [about a possible transfer], I was like, 'Where is this stuff coming from?'"

Preseason camp opens next month for Ohio State, and Miller said he still intends to be a quarterback. Meyer hasn't yet named a starter -- he said in March the decision was eating away at him -- and might choose to employ a multiple-QB system, like he did with Chris Leak and Tim Tebow in Florida.

"God put me on this earth ... to be an athlete," Miller said. "And the first thing in mind is being a quarterback and just be smart about what I do."