Brady: 'No excuses' for not beating Broncos' pressure 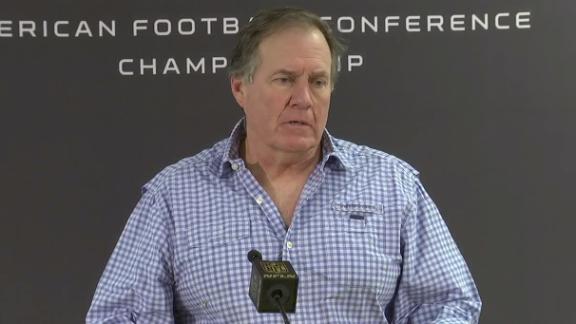 DENVER -- New England Patriots quarterback Tom Brady described Sunday's 20-18 loss to the Denver Broncos in the AFC Championship Game as "an uphill battle all day." He absorbed 23 hits while facing a barrage of pressure reminiscent of past Super Bowl losses to the New York Giants.

"When you play quarterback, you're going to take hits. You have to stand in there and make throws. There are no excuses for me for not getting the job done," Brady said. "Our guys fought hard. I'm proud of all the guys for what they tried to accomplish. We just came up one play short to a very good football team."

Brady spared his offensive line by saying "they hung in there all day" while noting the strength of the Broncos' defensive front. He relayed that the Patriots' plan was to get the ball to their skill-position players so they could make plays in space.

"It's a tough front with good players," he said. "They're teeing off on the cadence. We're trying to keep changing it up. They did a great job of it."

Still, the Patriots were in position to tie the game with 12 seconds remaining in regulation after Brady found tight end Rob Gronkowski for an improbable 4-yard touchdown on fourth-and-goal. All New England needed was a two-point conversion to send the game into overtime.

"It's a disappointing loss because this team fought pretty hard, just to come up short on a two-point play," Brady said. "It would have been a fun overtime, had we had the opportunity. We just came up one play short.

"I wish the two-point play would have been different. I'm sure everyone can look at different plays throughout the game when it's that close and say, 'Man, I wish I would have made that play.' But I'm proud of the way we fought, and we certainly fought until the end."

Brady was pressured on the play, and he fired over the middle to heavily covered wide receiver Julian Edelman. The ball was tipped into the hands of cornerback Bradley Roby.

Brady finished 27-of-56 for 310 yards, 1 touchdown and 2 interceptions. Entering the game, he had never completed fewer than half his pass attempts in a playoff game, with his low of 51.2 percent coming against the Tennessee Titans in 2003.

Third down was also a big issue, as the Patriots were 2-of-15, the worst third-down conversion rate in a postseason game in the Brady/Bill Belichick era (since 2001). In their two losses to the Broncos this season, the Patriots were 4-of-28 on third down.

With the loss, the Patriots won't have the opportunity to become the first back-to-back Super Bowl champions since they accomplished the feat in 2003 and 2004.

"I want to win it every year. I'd love to finish in the last game of the year and win it. It's a pretty tough thing to do," Brady said. "Hopefully, I have more opportunities for that. This team fought really hard. We just came up short."