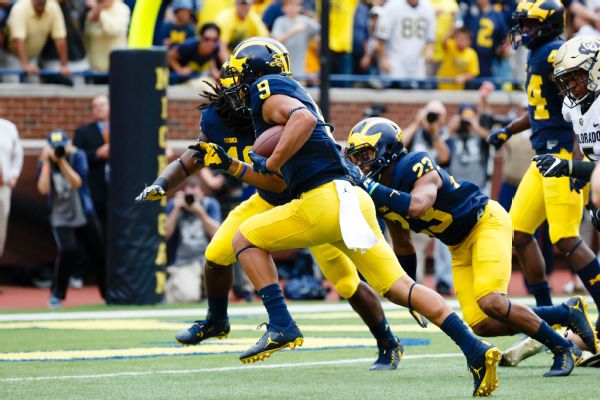 Michiganreceiver Grant Perry was arraigned Thursday on four charges stemming from allegations of a sexual assault in October, and the bowl-bound Wolverines have suspended him from all team activities.

Perry is accused of inappropriately touching a woman while waiting in line at an East Lansing, Michigan, bar in the early-morning hours of Oct. 15, according to the Lansing State Journal. The Wolverines did not have a game that weekend.

On Wednesday, Perry was charged with one felony countof assaulting, battering, resisting or obstructing an officer; two misdemeanor counts of fourth-degree criminal sexual conduct; and an underage drinking charge.

"When [police] arrived on scene, we tried to grab onto him, and we had to chase him," Lt. Scott Wriggelsworth, a spokesman for the East Lansing Police Department, said, according to the State Journal. "In the midst of that fracas, one of our officers suffered a minor hand injury."

Perry, 19, turned himself in Thursday and was released on bond, Wrigglesworth said.

The sophomore has 13 receptions for 183 yards and a touchdown this season.

"The University was made aware of the arrest of student-athlete Grant Perry earlier this fall," Michigan associate athletic director Dave Ablauf said in a statement Thursday. "He was immediately suspended from all team activities at that time and missed two games. Based on the information at that time, Grant was allowed to resume team activities pending the outcome of the investigation.

"Upon being informed that charges would be filed, he was immediately and indefinitely suspended from all team activities until the legal process is completed."

Perry reportedly has a preliminary hearing scheduled for Jan. 5.