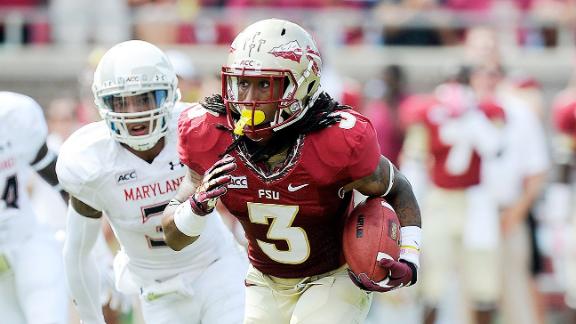 Florida State receiver Jesus "Bobo" Wilson has pleaded no contest to two misdemeanors for his role in a scooter theft on campus, his attorney confirmed Thursday.

Tim Jansen said Wilson had the initial felony charge reduced to misdemeanor petty theft and misdemeanor criminal mischief. Wilson already has paid $1,074 in restitution to the scooter owner, and was sentenced to spend 30 days on a jail work camp and two years' probation. The probation can be reduced to one year if he completes the work camp.

Wilson was automatically suspended from the football team after he was charged with a felony last month in connection with a stolen scooter. After initially telling police a friend let him borrow the scooter, he later admitted to investigators that he stole the scooter in June but did not plan on keeping it as long as he did.

The reduced charges pave the way for Wilson to be reinstated to the football team. There was no official word from Florida State about whether Wilson's status has changed.

Players report for fall practice Sunday. Wilson is expected to be a key contributor to the receiving group this fall after a standout spring.

"He feels great that this is over with. It's resolved. The restitution is paid," Jansen said. "It was a stupid mistake and he's moving on."