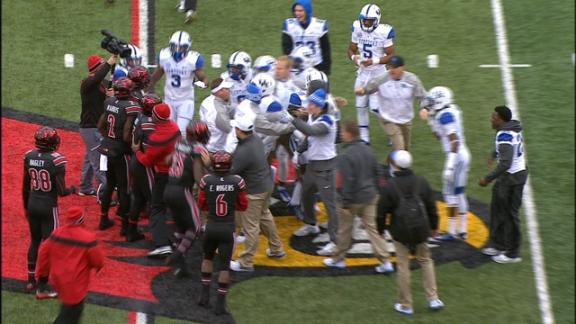 Louisvillecoach Bobby Petrino appeared to shove a Kentuckyassistant during an on-field scuffle prior to the in-state rivals' annual showdown Saturday.

The incident began when several Kentucky players stomped on the Cardinals' logo at midfield, which prompted an angry response from Louisville players and coaches.

The moment was the biggest of several confrontations that preceded kickoff.

"It was just emotions running high. It was just two hungry teams getting ready to play each other," Kentucky running back Stanley Williams said, according to the Courier-Journal. "We got a little amped up there before the game."

The pushing and shoving shifted toward the Kentucky sideline, where Petrino, who was coaching in the rivalry game for the fifth time in his career, appeared to grab and shove Wildcats assistant coach and director of football recruiting operations Dan Berezowitz.

"I just watched it get escalated," Petrino said after the game, "and then I turned around, and it was going on in another part of the field. The No. 1 thing we needed to do was get them separated."

Petrino went 4-0 against Kentucky in his first stint at Louisville from 2003 to '06.

No penalties were called as things calmed down, but the first quarter was physical. The Wildcats sacked Louisville freshman quarterback Reggie Bonnafon twice and decked him as he threw an interception leading to a Kentucky field goal.