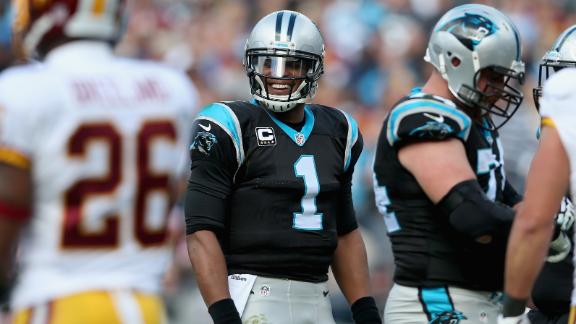 CHARLOTTE, N.C. -- The Washington Redskins searched for reasons why certain calls went against them Sunday. Defensive end Jason Hatcher has one theory: the team's nickname.

The Redskins were upset with several calls in Sunday's 44-16 loss to the Carolina Panthers, most notably an unnecessary roughness penalty on cornerbackChris Culliver. On the play, Culliver hit tight end Greg Olsen, who was attempting to catch a pass. The ball popped into the air, Culliver grabbed it at the Carolina 25-yard line and headed for the end zone for what would have been a 21-14 lead. Five plays after the penalty, Carolina scored a touchdown.

"I'm not saying this out of character to get fined, but it is what it is," Hatcher said. "I don't know if it's about the name or what, but at the same time, we play football, too. We work our butt off, too. Don't single us out. At the end of the day, it's the name. Don't worry about the name -- we're players and we work our butts off, too. I'm just frustrated with it.

"We shouldn't have to be punished for that. It's been every game, calls after calls that should've been made in our favor, but it goes to them. It's just not right. We're in the league, too. We're [NFL] players. We got a team, too. We go out there, and we sweat and work hard, too. I don't give a crap about the name. We are players. We've got feelings, too, and we want to win, too."

Hatcher's teammates didn't say the nickname was at the root of the calls, but there was definite frustration. Washington committed nine penalties for 68 yards -- the Panthers had eight for 66. It's just that the Redskins' penalties occurred at pivotal moments, like on the Culliver play. Tight end Jordan Reed was called for holding in the second quarter, which wiped out a run by quarterback Kirk Cousins to the Panthers' 3-yard line. They failed to score on the drive.

"A lot of guys were frustrated on the sidelines about that play," Redskins receiver DeSean Jackson said of the Culliver penalty. "We play tackle football, not two-handed touch. For unnecessary roughness, that's a crazy call. But I'm not a referee, and I don't get paid to do that, so it's not my decision. [But] a lot of players were definitely frustrated and yelling at refs."

That frustration carried into the locker room.

"That turned the whole game around," Redskins defensive end Chris Baker said. "Things started happening; we started unraveling. ... It was frustrating because we're seeing a recurring act, especially when we lose, which certain calls you just, how can you call that? This is football. That's a touchdown called back for playing football. This is the new soft NFL."

Baker also took to Twitter to air his grievances.

Culliver wasn't happy about the call, but he wasn't about to blame the officials. He took the same tact as his coach, Jay Gruden, who said, "The referee made a call, it's unchallengeable, so there is no use in me talking about it."

"Ain't much to talk about that play," Culliver said. "The refs said what they said, and we just move on to the next play. Whether you think it's right, I think it's right, whether whoever thinks it's right or wrong, the ref made his call."