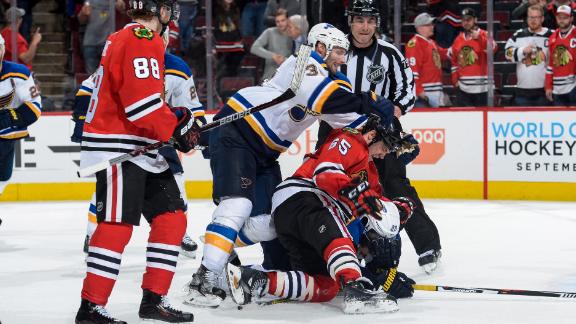 CHICAGO -- Chicago Blackhawks forward Andrew Shaw apologized Wednesday for yelling an anti-gay slur at someone on the ice after he was sent to the penalty box late in Chicago's Game 4 loss at home to the St. Louis Blues.

Speaking before the team left for St. Louis, Shaw said he couldn't sleep after Tuesday night's game and that watching video of his outburst was difficult. It was video of the incident that went viral on social media, prompting sharp criticism and an NHL investigation.

"It was hard to see. Emotions got the best of me," Shaw said, adding that he understands why the slur is considered hurtful. "I'll never use that word again, that's for sure. ... That's not the type of guy I am."

NHL spokesman John Dellapina said the league would have no comment until its investigation is completed.

Shaw was sent off for interference at 17 minutes, 56 seconds of the third period, hurting Chicago's chance for a comeback in what ended up being a 4-3 loss. While sitting in the box, Shaw pounded on the glass with his stick and then yelled at someone on the ice. As video of the incident spread online, the You Can Play project swiftly tweeted that it was planning to contact the NHL.

After the game, Shaw was asked twice about what happened and said he didn't remember.

"Being like I just said -- I'll repeat myself for you -- emotions are high,'' he said. "I don't know what was said. Obviously, I was upset with the call. I wasn't happy with the call."

A day later, Shaw said he saw the video after he returned home from the arena and said he was "sincerely sorry for the insensitive remarks that I made."

"I apologize to many people, including the gay and lesbian community, the Chicago Blackhawks organization, Blackhawks fans and anyone else I may have offended," he said. "I know my words were hurtful, and I will learn from my mistake."

The team said it was "extremely disappointed" by the incident, but it did not indicate whether Shaw will face any punishment. Shaw scored a goal in the second period and had two assists in the loss, which left the defending Stanley Cup champions on the brink of elimination.

The team recently highlighted its partnership with You Can Play, which lobbies for equal and respectful treatment of all athletes without regard to sexual orientation. Defenseman Niklas Hjalmarsson and goaltender Scott Darling participated in a video supporting the group's mission.

"Our team pledges to support all our coaches, teammates and fans," Darling says in the video. "We believe that athletes should be judged by their character, work ethic and talent, not their sexual orientation or gender identity."

A national television audience heard Kobe Bryant shout the same slur in 2011 at a referee he thought had made a bad call during a basketball game. Chicago Bulls center Joakim Noah yelled it at a Miami Heat basketball fan who had been antagonizing him during a game a month later. Both quickly apologized, and the National Basketball Association hit them with large fines: Bryant was fined $100,000, and Noah was fined $50,000.

Also in the NBA, Sacramento Kings point guard Rajon Rondo was suspended one game in December for using the slur as he berated official Bill Kennedy, who subsequently came out as gay. Major League Baseball in 2014 suspended Yunel Escobar, then a shortstop with the Toronto Blue Jays, for stenciling the word, in Spanish, onto his eye black.

Like MLB, the NHL has never had an openly gay player on an active roster. The founder of You Can Play, Patrick Burke, works in the NHL's player safety office. He has championed the LGBT cause and said earlier this year that he has met gay players through the years who have been on active NHL rosters.

When asked whether players have changed how they talk on the ice since he came into the league, Pittsburgh Penguins captain Sidney Crosby said players have become more careful about what they say.

"I think today with cameras and mics and everything is picked up so much more maybe, I think that's a big difference," said Crosby, who has been involved with the NHL Players Association throughout his career. "But, yeah, I think everyone's aware of kind of what the line is and crossing the line and that kind of thing. At the end of the day, things are going to be said that guys regret. It's emotional, and we've all been there. We've said stuff that we probably shouldn't have. It's the heat of the moment, and most of the time, you know, you catch yourself right away, but it does happen out there."