Bird to Stephenson: Cut it out 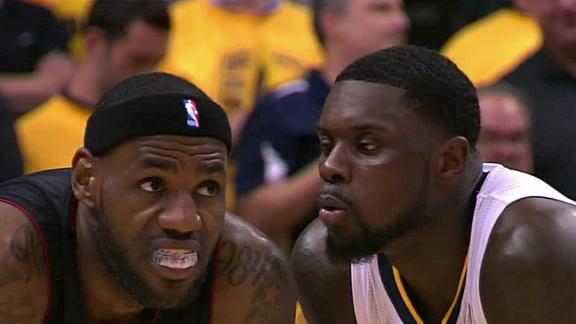 MIAMI -- Indiana Pacers president Larry Bird called a meeting with Lance Stephenson prior to Friday's Game 6, two days after Stephenson was caught blowing in the ear of Miami Heat star LeBron James and given his second flopping fine of the Eastern Conference finals.

"He said, 'Don't do it again,' so I'm not going to do it again," Stephenson said after the Pacers' shootaround. "He's kept me on the right path my whole career, and if he says something to me, I take it to heart."

When asked what would have happened had Stephenson blown in Bird's ear in a playoff game during Bird's playing days, Stephenson was blunt.

"There probably would've been a fight," he said. "But this is a different type of game from the '90s. You can't throw blows."

Stephenson has been a constant distraction in this series and has drawn more attention for his off-court comments and on-court antics than for his play. In addition to the flopping fines and the ear blowing, Stephenson has gotten involved in protracted trash talking with James and Dwyane Wade.

"I'm not talking about Lance Stephenson for the rest of the playoffs," Chris Bosh, the third part of the star trio in Miami, said Friday.

Yet Stephenson, in an odd admission, says he doesn't think his tactics are even working.

"I don't think I can get into LeBron's head," he said. "He's the best player in the league, he knows how to play through that kind of stuff. I don't think it bothered him at all. I have a lot of respect for him. He's going to find a way to play great."

This statement, of course, opens another area of wondering about Stephenson's motivations. The Pacers, though, are trying to move past all of it as they attempt to win their fourth elimination game of the playoffs.

"It's time to get back to basketball," forward Paul George said. "We have to focus."

Can Stephenson's Antics Get In LeBron's Head?
Bruce Bowen discusses whether Lance Stephenson's antics can get inside the head of an elite player like LeBron James.