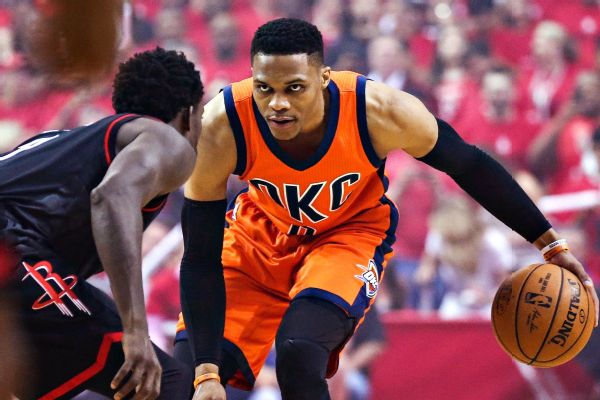 OKLAHOMA CITY -- Russell Westbrook has been able to do just about anything he wants this season. He averaged a triple-double, broke Oscar Robertson's single-season record for triple-doubles and carried the Thunder to the playoffs despite the loss of Kevin Durant in free agency.

Thus far in the playoffs, however, his individual brilliance hasn't translated into wins against the Houston Rockets.

"Let's be honest," Thunder coach Billy Donovan said Thursday after his team practiced in Oklahoma City. "When Russell has been off the floor for us, there's been a differential."

In the Thunder's 115-111 loss in Game 2, the team simply couldn't function without Westbrook on the court. OKC was outscored by 15 when Westbrook was on the bench. By comparison, the Rockets were plus-2 with their MVP candidate, James Harden, on the court or off the court.

Of particular importance was a 90-second stretch at the end of the third quarter in which the Rockets went on a 12-3 run to cut OKC's 12-point lead to three with Westbrook on the bench. He rushed back into the game to start the fourth quarter, forgoing the extra two or three minutes of rest he normally takes at the start of the quarter, and played the full 12-minute period.

Whether that contributed to Westbrook's 4-for-18 shooting in the fourth quarter is hard to say. No player has missed as many shots (14) in one quarter of the playoffs in 20 years. But Donovan says Westbrook has earned the right to play all of the fourth quarter and take all those shots.

"I have an enormous amount of trust and confidence after being with Russell this season for 82 games and seeing the ways he's closed out games and different things that he's done," Donovan said. "I trust him when he's got the ball in terms of making decisions.

"Sometimes, when the ball goes in the basket, people have a tendency to say, 'Wow! This was just an unbelievable performance!' And 'Is he the best closer in the game?' And then when they don't go in, it's gonna be, 'Did he take too many shots?'

In the regular season, Westbrook's 82 made field goals in clutch time (the last five minutes of a game, with the score within 5) were 18 more than any other player.

His field goal percentage in those periods (44.6 percent) was above the league average of 42.2 percent.

It just didn't happen for him in the fourth quarter on Wednesday.

"We just gotta make plays, make the right decisions," Westbrook said, when asked what happened to his team in the fourth quarter. "The game will tell you what you need to do."

What Westbrook could really use, besides his normal rest at the start of the fourth quarter, is some help carrying the load offensively. Defensive specialist Andre Roberson has been the Thunder's second-leading scorer in each of the first two playoff games, averaging 14 points a game in 36 minutes. That's a nice bonus for the Thunder (and potentially Roberson, who will be a restricted free agent this summer), but it underscores what they're not getting from players they normally count on for scoring.

Collectively the trio of lottery picks -- Victor Oladipo, Enes Kanter and Steven Adams -- the Thunder have surrounded Westbrook with is averaging just 20 points a game.

Oladipo has really struggled from the floor in the first two games, hitting just 5 of 26 shots. According to ESPN Stats & Information, over the last 30 years, there have been almost 1,100 instances of a player taking at least 25 shots in his team's first two games of the playoffs. Oladipo's field goal percentage of 19.2 percent is the third worst among all of them.

It's not for a lack of effort, however. Oladipo is 1-for-11 when creating his own offense. In other words, he's being aggressive. He's also 1-for-10 off passes from Westbrook.

Westbrook said he has talked with Oladipo about how the first two games of the series have gone, and given him advice.

"Just play. Go out and compete at a level that he's able to compete at. That's it," Westbrook said. "He wants to do good, he wants to be great. Like every player. Everybody wants to come out and play great, it doesn't always work out that way. Your mindset has to keep going regardless of whether you miss or make shots. He does so many more things for our team when he's on the floor. Defending the high-low, rebounding, can make plays. Regardless of whether he misses or make shots, his job is to play. He'll be all right."
Related topics:
sportsespnpostseasonoklahoma city thunder2017 playoffspatrick beverleyhouston rocketsbilly donovanrussell westbrooknba
Copyright © 2020 ESPN Internet Ventures. All rights reserved.
More Videos
From CNN Newsource affiliates
TOP STORIES