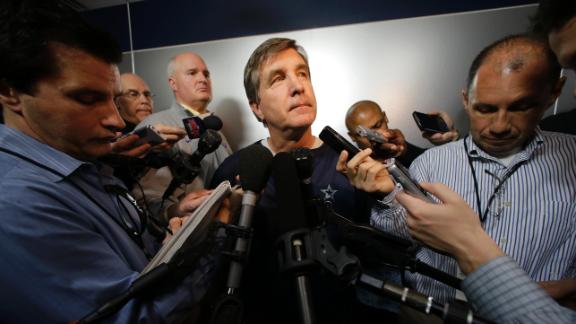 Callahan had offers from teams as both an offensive coordinator and offensive line coach before deciding to join the Redskins.

Cowboys owner Jerry Jones expressed an interest in retaining Callahan, and the Cowboys initially requested a chance to counter any offer Callahan received. But it was quickly evident that any number of the eight teams reportedly showing interest in Callahan would make more competitive offers.

Callahan was part of Jon Gruden's staff with the Oakland Raiders and became the head coach when Gruden was traded to Tampa Bay. Callahan coached the Raiders to the Super Bowl, where they lost to Gruden's Buccaneers. Jay Gruden, Jon's brother, is coach of the Redskins.

With the Cowboys, Callahan lost play-calling responsibilities after one year when Jason Garrett hired Scott Linehan, who, according to league sources, has reached agreement on a three-year contract that will keep him on Garrett's staff and name him as the team's offensive coordinator.

Callahan is regarded among the best line coaches in the league and has played a significant role in developing three first-round draft picks who started for the Cowboys -- tackle Tyron Smith, center Travis Frederick and guard Zack Martin. The offensive line helped running back DeMarco Murray lead the NFL in rushing.

The Redskins started the process of upgrading their line last offseason, signing left guard Shawn Lauvao and drafting guard Spencer Long and tackle Morgan Moses in the third round.

But the run game did not produce as desired. Washington averaged 4.2 yards per carry, 14th in the NFL, and Alfred Morris averaged a career-low 4.1 per carry en route to 1,074 yards. In 2012-13, the Redskins ranked second in the NFL at 5.01 yards per carry. They used a zone blocking scheme in the past but incorporated more power this past season, Gruden's first with the team. Callahan has coached with more of a power and gap-blocking approach, which meshes with Gruden's desire.

The Redskins also allowed 58 sacks. But that wasn't just on the line, as the quarterbacks often held the ball too long -- Robert Griffin IIIwas sacked 33 times in 214 pass attempts, compared to Kirk Cousins getting sacked eight times in 204 -- and the backs and tight ends were inconsistent in protection.

Earlier this week, the Redskins granted line coach Chris Foerster permission to interview with Buffalo for a similar position. Foerster had a big say in the run game during his five seasons in Washington.

Information from ESPN.com Redskins reporter John Keim is included in this report.