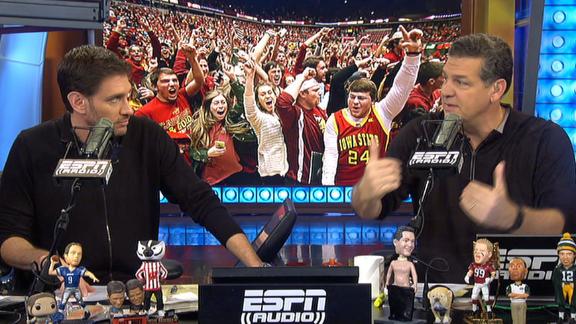 DES MOINES, Iowa -- Seven months after toughening penalties for schools whose fans rush onto the field of play, the Big 12 said Friday that it will not discipline Iowa State after students stormed the court following a basketball game in a scene that left a newspaper columnist with a broken leg.

The league said the way Iowa State handled the postgame celebration was consistent with Big 12 guidelines for sportsmanship and ethical conduct, adding that it considers the matter resolved.

Randy Peterson of the Des Moines Register was knocked over while walking from press row to a postgame news conference Thursday after fans rushed the court in Ames following Iowa State's 83-82 win over rival Iowa. Peterson broke the tibia and fibia in his left leg but said Friday he has no problem with what happened.

"If fans want to storm the court, they're going to do it," Peterson said in his room at a Des Moines-area hospital. "It happens everywhere. I mean, this is just this year's incident. ... It just so happens that it happened to me. I think the Big 12 will look at it not just because of this. I think they've probably been looking at it for a while."

The incident with Peterson was the first major test of the Big 12's stricter guidelines. The league passed a measure in May allowing it to fine member schools, even taking away a future home game if necessary, for failing to keep fans from storming courts or rushing fields after games.

The measure came on the heels of an ugly incident in February at Kansas State, where Kansas coach Bill Self was pushed up against a press table after the Wildcats beat the Jayhawks. Kansas State officials apologized and said its security staff had failed to get into position in time.

Lou Marciani, the director of the National Center for Spectator Sports Safety and Security at Southern Miss, said the first priority for a university in such incidents is to ensure that the players, coaches and officials are immediately protected by getting them to their locker rooms safely.

But there is little that can be done to stop determined fans from swarming a field or court after a big game.

"People's emotions take over, and they're so excited that they are going to come on," Marciani said.

Peterson, who has worked as a sports writer for the Register for roughly four decades, had surgery Friday. Doctors put a rod in his lower left leg, and it is unclear when he will be able to return to work.

"Just to be clear, I was not trampled by the crowd, I locked legs with someone ... I think," Peterson tweeted Friday morning.

He said he believes the person with whom he collided wasn't a student, and he praised Iowa State officials for their quick response to the incident. He said Big 12 commissioner Bob Bowlsby was among those who have texted him well wishes.

Peterson will miss Sunday's Iowa State-Arkansas-Pine Bluff game, but he said he hopes to return in time for a Dec. 19 matchup between the Cyclones and Northern Iowa in Des Moines, just blocks from his hospital bed.

"I'm feeling about as good as I expect for a guy that broke two bones," Peterson said. 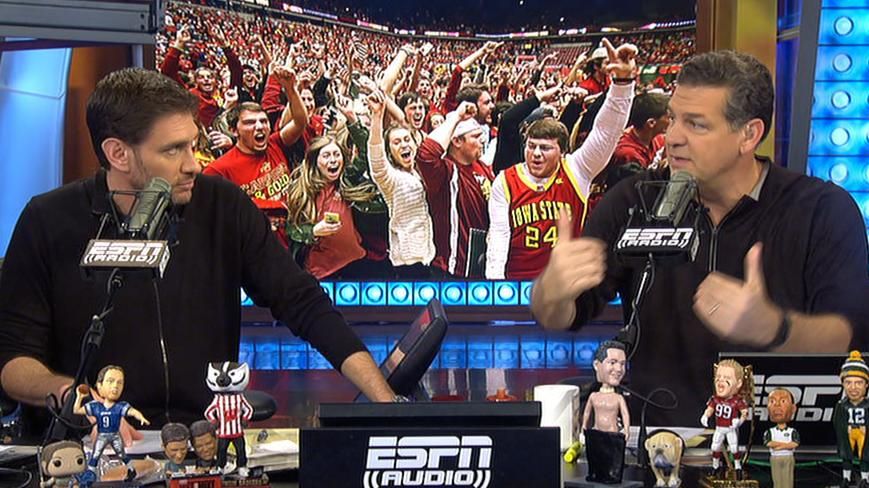