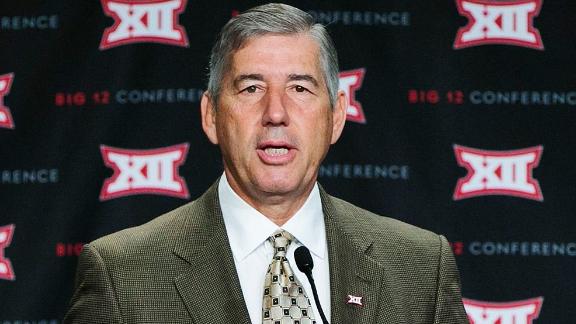 Big 12 commissioner Bob Bowlsby was unapologetic Friday as the Power Five start to move ahead after securing more control than mid-major and smaller conferences.

The NCAA Division I board of directors on Thursday voted 16-2 to allow the schools in the top five conferences to write many of their own rules.

"I think the only message is that our student-athletes and our programs are largely the face of what America knows as college athletics," Bowlsby told ESPN's "SportsCenter" on Friday. "We win more than 90 percent of the NCAA championships every year.

"... I think this [vote] recognizes that there are some differences, and programs at our level have some unique challenges, have some relationships with student-athletes that are evolving. We need to have rules that respond to that evolution and those changes. I think it's an acknowledgment that some of us have challenges that are unique. It's because of those challenges that we felt like we needed an opportunity to control a little more of our destiny."

The autonomy measures will allow the top 64 schools in the richest five leagues (ACC, Big 12, Big Ten, SEC and Pac-12) plus Notre Dame to decide on things such as cost-of-attendance stipends and insurance benefits for players, staff sizes, recruiting rules and mandatory hours spent on individual sports.

That legislation must be submitted by Oct. 1 to have it enacted at the January 2015 NCAA convention in Washington, D.C.

Tom Yeager, the commissioner of the Colonial Athletic Conference, told "The Freddie Coleman Show" on ESPN Radio that the CAA was one of those that opposed autonomy for the Power Five.

"I think the current system can address a lot of the present problems," Yeager said Thursday night. "Our presidents were really entrenched in that, coupled with the feeling also that the autonomy is not going to solve all the issues coming out. So it was more on a philosophical plane, on the absolute commitment to continue to work together to find solutions -- but that we didn't need a complete overhaul of the system to do that, we believe.

"We'll see how it all plays out. It's a little bit of, 'Be careful what you wish for.' Because you're not going to be in a position now as blaming the woes or whatever is inhibiting you from doing whatever you want with all your money. You can't blame it on us anymore. We're not even in the room."

Several presidents said Thursday that the full cost-of-attendance stipends, which could be worth between $2,000 and $5,000 per player, likely would be the first item taken up after it had been shot down by the full membership three years ago. Four-year scholarship guarantees also are expected to be on the early agenda.

Bowlsby said Friday that too many athletes are using college sports simply as a stepping stone to achieve professional status.

"This [vote] is about higher education. It's about helping 18-year-old adolescents become 22-year-old adults. That's what it is," Bowlsby told ESPN. "It may not meet everyone's needs, but that's what I believe it always should be.

"We have too many people in college that are only there for the opportunity to get to the next level. While creating the opportunity for kids to have a professional career and participate in the Olympics is a highly desirable byproduct of the college athletic experience, it isn't fundamentally why we're here."

A new 80-member voting panel, which will include 15 current players, will determine autonomous policies for the five leagues.

Leagues outside the Power Five can opt to adopt the same rules; however, many wouldn't be able to afford measures like cost-of-attendance stipends. That could create an even larger competitive imbalance between schools in the power conferences and those in leagues like the Sun Belt, MAC or even in the FCS.

If 75 schools from outside the Power Five vote to override the autonomy legislation in the next 60 days, the measures would be sent back to the board of directors for further consideration.

"Nobody begrudges the fact that there are huge revenues out there and that institutions should be able to determine how they spend it," Yeager said. "A lot of the discussion that concern for the student-athlete was unique to those 65 institutions just isn't right. It's not accurate."