KTRK
ATLANTA (KTRK) -- It's a sad day for baseball fans as legendary Hall of Famer Henry "Hank" Aaron has died at the age of 86, the Atlanta Braves organization confirmed.

He died in his sleep.

Aaron played the majority of his career with the Milwaukee/Atlanta Braves and was inducted into the Hall of Fame in 1982.

Aaron grew up in Mobile, Alabama, with stints in the Negro Leagues and the minor leagues before playing with the Braves.

It's with that team that he morphed into the legend we know today.

According to the National Baseball Hall of Fame, 1957 was arguably Aaron's best season when he captured the National League MVP and led the Braves to their first World Series Championship since 1914.

But his time in the national spotlight was still to come, when in 1974 he made history, hitting his 715th career home run.

That's not the only way Aaron's name has been tied to Houston.

Two years later, Aaron would return to Houston and Minute Maid Park when he was part of ceremonial and off-field activities for Game 2 of the 2019 World Series.

At that time, the Fall Classic was between the Astros and the Washington Nationals.

Aaron appeared for the on-field trophy presentation for the winners of the 2019 Hank Aaron Award.

Astros manager Dusty Baker even played with Aaron as a young major leaguer after Baker signed with the Braves.

"I got to know Hank Aaron. Before I signed, he promised my mom he'd take care of me as if I was his own son. I was always with Hank. That's an experience I wouldn't trade for anything, and that's why I know God put me in a situation for a purpose," Baker said in a June 2020 Sports Illustrated article.

Baker was even there for the historic night that Aaron surpassed Ruth in home runs.

Baker reacted to news of Aaron's death Friday morning, saying that Aaron was "second only to my dad, and my dad meant the world to me."

Astros manager Dusty Baker, reached this morning in California, was devastated to learn of the passing of friend and mentor Hank Aaron, saying: "He was second only to my dad, and my dad meant the world to me." pic.twitter.com/x0P5MNfDmc

Here is Baker's official statement. The Astros also called Aaron "one of the most influential figures in our nation's history. His impact on society transcended sports."

Astros manager Dusty Baker, who was a teammate and close friend to Hank Aaron, released the following statement: pic.twitter.com/zghFSWKFR8

The #Astros released the following statement on the passing of baseball legend Hank Aaron: pic.twitter.com/nKVUCtvEfm

But his time here goes back even further than that.

Archive photos show the moments when Aaron was congratulated by his teammates at the Astrodome because he'd hit his 712th home run on Sept. 22, 1973.

Aaron's blast at the time came with two men on and was his first home run in the Astrodome that year. 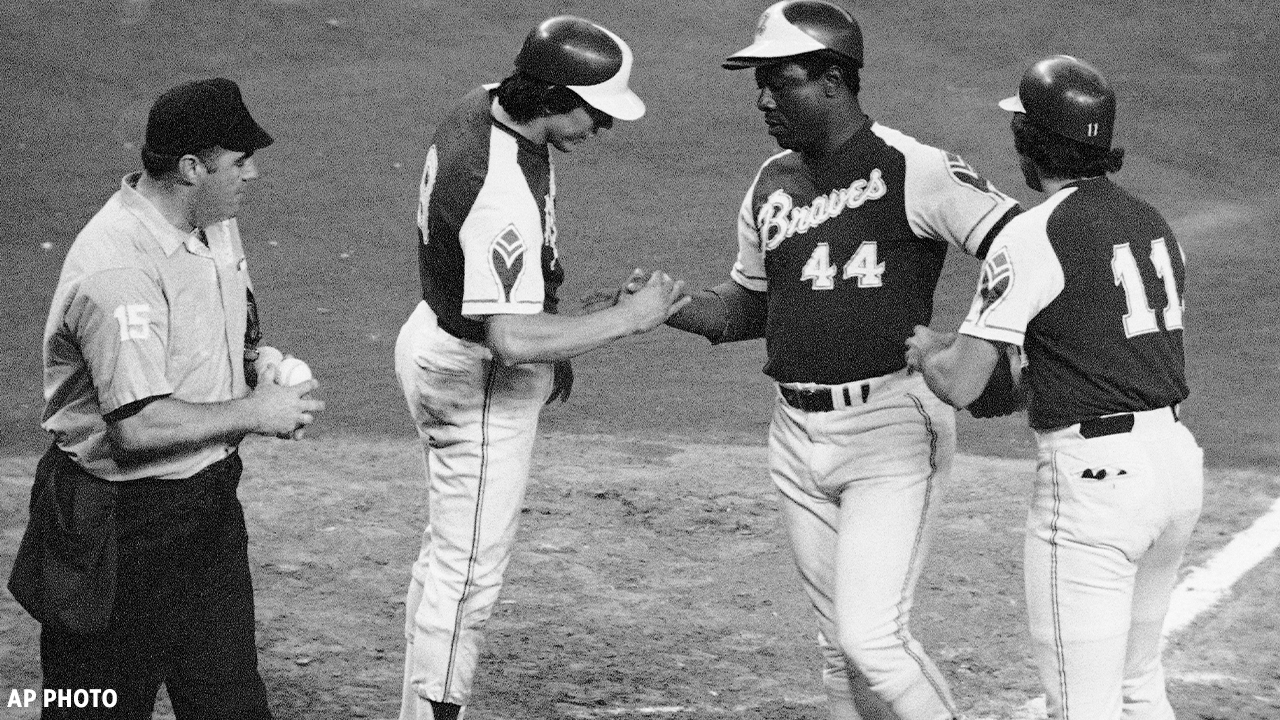 Aaron's impact has clearly been felt as tributes started to pour in for the late baseball icon.

Former Houston Rockets general manager and current Philadelphia 76ers president Daryl Morey wrote that his father took him to his first baseball game to make sure he saw Hank Aaron before he retired.

My Dad took me to my first baseball game to make sure I saw Hank Aaron before he retired. I was so young I barely remember it except my Dad telling me over and over "there he is!" - Rest in Peace

Veteran journalist Dan Rather wrote, "A slugger has rounded the bases for the last time. Hank Aaron was a trailblazer and a hero who had to stare down hatred. He was also one of the best ballplayers to ever play the game."

A slugger has rounded the bases for the last time. Hank Aaron was a trailblazer and a hero who had to stare down hatred. He was also one of the best ballplayers to ever play the game.  He was a joy to watch and a marvel to behold. May he Rest In Peace.

Here are a few more tributes.

One of the best to ever play our game.

According to WSB in Atlanta, Aaron's family was so poor, they couldn't afford baseball equipment. He honed his skills by hitting bottle caps with sticks.

But clearly, nothing could stop his talent.

Aaron's final tweet was Jan. 5, when he and civil rights leaders got vaccinated for COVID-19 at the Morehouse School of Medicine in Georgia.

His hope was to send a message to Black Americans that the shots are safe, telling the Associated Press, getting vaccinated "makes me feel wonderful."

I was proud to get the COVID-19 vaccine earlier today at Morehouse School of Medicine. I hope you do the same! https://t.co/RAlkmkCRra