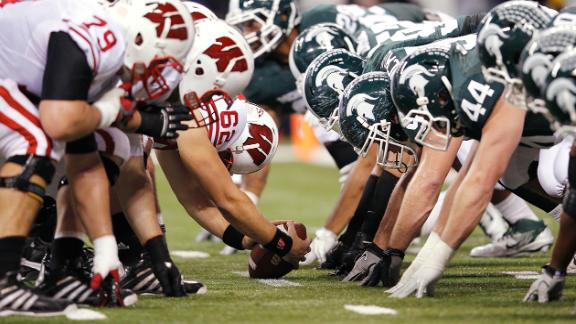 Hornibrook, a redshirt freshman, excelled off the bench in place of fifth-year senior Bart Houston during Wisconsin's come-from-behind 23-17 victory against Georgia State on Saturday. Hornibrook entered the game in the third quarter with Wisconsin leading 6-3 and guided the Badgers to their only two touchdown drives, including the game winner.

"I thought that when we were in fall camp, I told both quarterbacks that we've got to get them both ready to play and that they both would play," Chryst told the Big Ten Network. "Sure enough, both have played. I thought Alex did some really good things and helped us. I thought he earned the opportunity to get more snaps and to get the start.

"It really wasn't as much what Bart did or didn't do. I just thought Alex has earned the opportunity to get the start. Looking forward to seeing him play and know through this season -- heck, we don't even know how the game's going to turn out -- that Bart still will play and be significant to our team."

No. 11 Wisconsin (3-0) plays No. 8 Michigan State (3-0) at noon ET on Saturday in East Lansing. The decision to change quarterbacks comes at a pivotal moment for Wisconsin, which will play four ranked Big Ten teams in its next five games.

Hornibrook completed 8 of 12 pass attempts for 122 yards with one touchdown and one interception Saturday. In two appearances this season, he has connected on 76.5 percent of his passes (13 of 17) for 183 yards. The quarterback competition lasted deep into fall camp, and Hornibrook appeared to hold a slight lead in mid-August.

Houston, who started the first three games, has completed 44 of 71 passes (62.0 percent) this season for 527 yards with two touchdowns and two interceptions. He helped lead the game-winning drive in the season opener against LSU, but he also threw two ill-advised interceptions in that game -- one in the end zone and another that was returned for a touchdown.

Wisconsin also has struggled to score touchdowns with him under center. The Badgers have five touchdowns in Houston's 28 drives; Hornibrook has five TDs in nine drives.

"Both need to keep growing for us to be the best offense we can be," Chryst said. "I've liked the way they've both approached it and really been straightforward with them throughout the whole process. So when something like this does come up, it's not as much of a shock to the kids. It's more newsworthy outside of it. And I understand that and you appreciate that. But for the kids, it's been pretty consistent.

"It just happens to be flipped -- Alex instead of Bart. They've handled it well this week, and that you're thankful for as a coach."