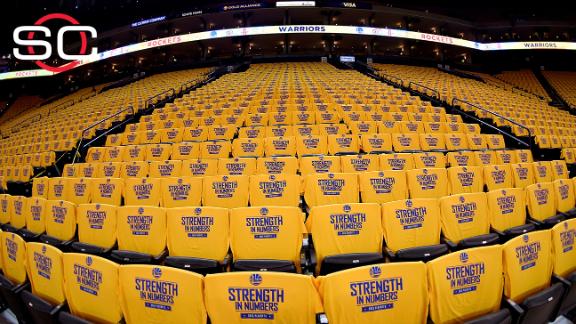 Go see Game 1 of the NBA Finals in person or buy a television?

That's a question fans have had to ask themselves over the last week as Thursday night's opener between the Cleveland Cavaliers and Golden State Warriors at Oracle Arena in Oakland, California, has become the most expensive Game 1 on the resale market in NBA Finals history.

That's almost $1,000 more than what fans have paid for Game 1s over the past four Finals.

StubHub spokesman Glenn Lehrman said last year's Heat-Spurs opener in San Antonio had an average resale price of $460, the cheapest in the past five years. The same matchup in 2013 for Game 1 in Miami cost an average of $558.

Ticketmaster has two courtside seats located under the basket for $58,250 each on Thursday night, but selling them for that price might be a bit optimistic. The highest price actually paid for a seat has been $36,843 on Ticketmaster and $35,612 on StubHub.

With fewer tickets on the overall resale marketplace than usual, prices aren't expected to drop come game time. As of noon ET, the get-in price for the cheapest seat on Ticketmaster was $693. The cheapest seat on StubHub was $80 more.

StubHub is currently suing the Warriors and Ticketmaster, alleging that the team's restricting of the secondary ticket market for season-ticket holders to Ticketmaster is monopolistic and illegal.

Last month, both the Warriors and Ticketmaster moved to dismiss the suit on its merits, namely that it has the right to control where tickets are resold as part of the terms of buying them and that StubHub had the chance to bid on being the official partner. Should the lawsuit go to trial, it could determine, for the first time in a legal setting, whether fans own the right to the tickets that they buy or if they merely license the privilege from the team.

Game 1 ticket costs hit record in resale market
Darren Rovell discusses Game 1 of the NBA Finals between the Cavaliers and Warriors, which has become the most expensive Game 1 on the resale market in NBA Finals history.