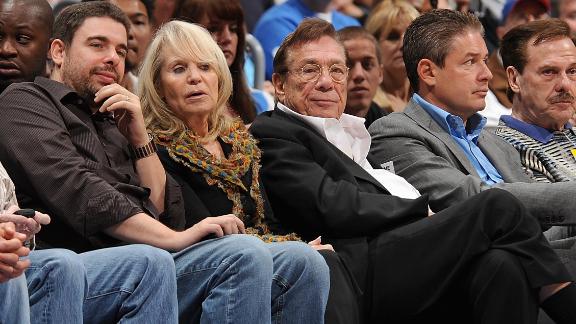 LOS ANGELES -- The attorneys for Shelly Sterling said Wednesday they will ask a judge to issue a ruling allowing the $2 billion sale of the Los Angeles Clippers to former Microsoft CEO Steve Ballmer to proceed despite pending lawsuits brought by Donald Sterling in both federal and civil court contesting his wife's authority to sell the franchise without his consent.

Pierce O'Donnell, the lead attorney for Shelly Sterling, said he would seek what would effectively be an emergency, appeal-proof ruling after testimony concluded in the California probate court case to determine whether she acted properly in removing her husband from the family trust which owned the franchise before selling it to Ballmer.

"We think we have overwhelming evidence from [interim Clippers CEO] Dick Parsons and Anwar Zakkour from Bank of America, that if you don't let this sale go through and meet the deadline for the sale, an incredibly valuable asset will fall like a rock," O'Donnell said. "If Donald Sterling stays on as the manager and owner of this asset, Doc [Rivers] won't coach, Chris Paul won't play, sponsors will stay away and TV ratings will fall. It is an urgent matter that this sale be closed immediately to Mr. Ballmer and restore some stability and, frankly, dignity to the NBA in Los Angeles."

O'Donnell cited section 1310 (b) of the California probate code, which allows the judge to approve the sale if there is imminent loss of value to the trust.

Such rulings are rare, however, and it is not clear whether the pending federal and civil lawsuits even would be affected by such a ruling. Donald Sterling's attorneys laughed off the notion that the Clippers were in such a dire state.

"The other day we were warned of a death spiral," his lawyer Bobby Samini said, referring to a phrase Parsons used on the stand Tuesday to describe the precarious state of the team's finances if Donald Sterling remained as owner. "I was very careful crossing the street and nothing happened yesterday. Maybe it's coming today, maybe next week. We'll see what Doc Rivers does. Because I don't see that's the way things are going."

Testimony in the three-week-old probate court trial concluded Wednesday with an Alzheimer's disease expert, Dr. Jeffrey Cummings, testifying that the results of the two exams performed on Mr. Sterling could have been affected by Shelly Sterling's presence during the exams. Having his wife present, Cummings testified, could have created stress that affected his performance.

Cummings also testified that it was not absolutely necessary for a doctor to inform a patient of the legal and financial ramifications of such testing, but said "honesty" and "trust" between patient and doctor was ideal for such cases.

Max Blecher, another of Donald Sterling's attorneys, tried to introduce Cummings' evaluation of Sterling -- in which he found he was mentally competent -- into evidence; however, Judge Michael Levanas said that issue was no longer within the scope of the case.

Blecher argued that the process of declaring his client mentally incompetent was "a ruse" because Shelly Sterling wanted to sell the team and her husband did not.

"They wanted to sell the team," Blecher said. "The commissioner [Adam Silver] planted that in O'Donnell and Shelly's head when they met in New York on May 13. He planted that in their head. He said you have to own all of the stock and then we can sell it. So they came home and the very day that meeting took place, Shelly arranged the interviews with the doctors. What does that tell you? That tells you from the very first interview between the psychologist and Donald, is that Plan B [to declare Donald Sterling mentally incompetent] is in effect.

"And yet Shelly said she never heard of Plan B, so they flew out a high-class banker from New York [Zakkour] and he testified that they sat in a meeting together and talked about Plan B. So either she has a failure of recollection or she's a liar. You choose."

Levanas ordered attorneys from both sides to submit closing briefs by Thursday afternoon and appear back in court Monday morning at 10 a.m. for closing arguments.

The sale was initially scheduled to close by July 15. That deadline has been extended to August 15. The NBA has said it will resume termination proceedings against Sterling if the sale does not close by September 15.

Samini cast doubt on the idea that the outcome of this trial will resolve the sale.

"I know everybody was here waiting, thinking that this ruling would determine the fate of the sale. I don't think it will," he said. "That's going to go on. Until you get to the conclusion in [the civil court lawsuit Sterling filed Tuesday], I don't think you get anywhere close to a sale. This is going to go on.

"Yes, he's going to continue to fight. No, he doesn't want to sell the team. Two billion is not enough money to sell your principles.

"This thing is going to go on for a while, and unfortunately it doesn't seem like the NBA is really interested in seeing a resolution of this either, because they've never made any attempt or effort to try and resolve it. They just haven't. The only thing I've heard from them is, 'I'm (the) new emperor and I'm going to dictate what's going to happen.'

"There's no way you get to a settlement, not when you have somebody on the other side who is going to fight to the end."

O'Donnell, though, said he's optimistic the judge will issue a ruling to resolve the situation.