Astros' pen delivers, Nats waste chances -- and now we have a series 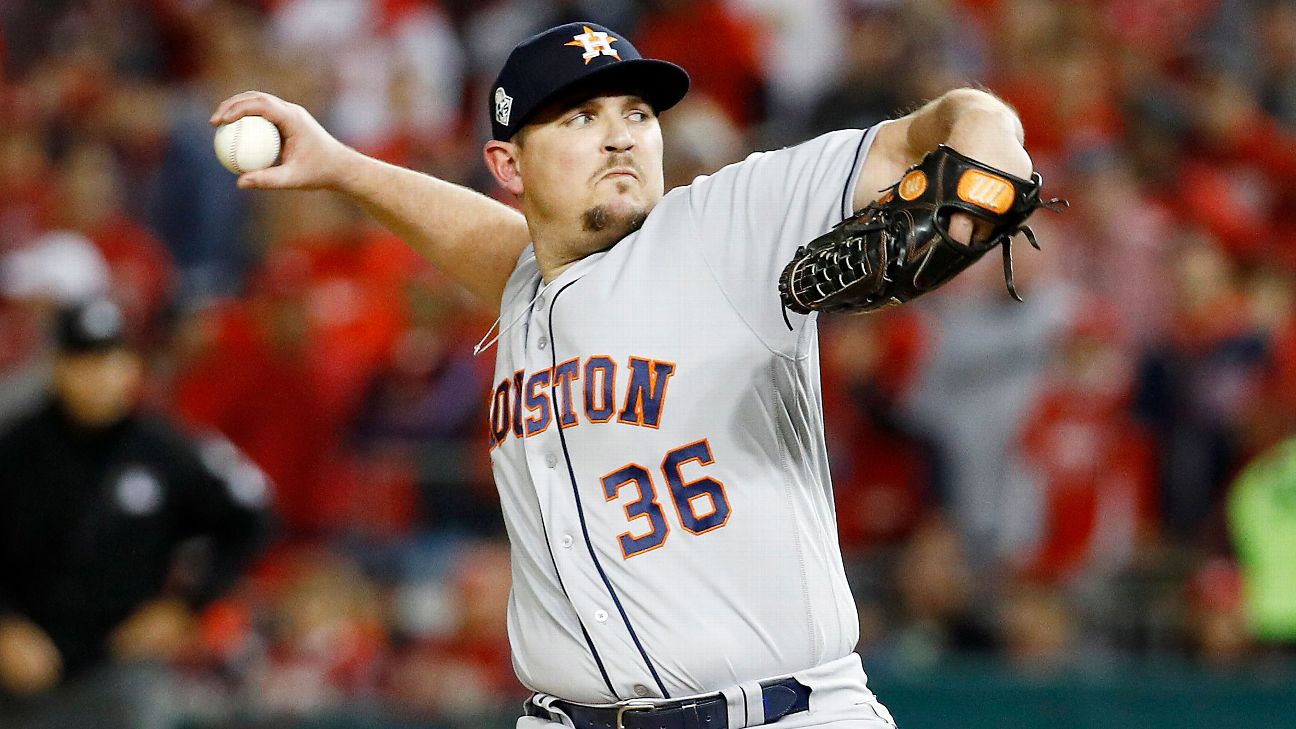 ESPN
By David Schoenfield
WASHINGTON -- The first World Series game in the nation's capital in 86 years won't exactly go down as a classic contest to remember, but the Houston Astros don't care about baseball elegance or splendor. They just needed a W. The Astros will enjoy their 4-1 victory Friday, which included baserunners all over the place, some magical 68 mph curveballs from Zack Greinke and a Houston bullpen that tossed 4 scoreless innings, and means we won't see the first World Series sweep since 2012.

The World Series now readsWashington Nationals 2, Astros 1 as we head into the crucial Game 4 on Saturday night that will feature Patrick Corbin for the Nationals against against rookie Jose Urquidy for the Astros. That Houston pen delivered in Game 3 as Josh James, Brad Peacock, Will Harris, Joe Smith and Roberto Osunagave up two hits in getting the final 13 outs. James got a big out in the fifth inning, and Harris, who has been the team's best reliever in the postseason, escaped a two-on jam in the sixth and retired all five batters he faced.

The Nationals had their chances off Greinke, leaving 12 runners stranded. They went 0-for-10 with runners in scoring position, the 17th time in World Series history a team has gone 0-for-10 or worse with RISP and the first time since the 2008 Phillies went an all-time worst 0-for-13.

It was a grind-it-out win for the Astros and now we have a series. Nationals fans also learned a valuable lesson: Welcome to the World Series. It's never easy. They should also take some advice from longtime first baseman Ryan Zimmerman: "We've lost a baseball game before. Everybody will be OK."

Considering the Astros won 107 games, a sweep was an unrealistic belief anyway. "It's a really good team," Zimmerman said. "If we don't play good baseball, we'll lose. Stay positive. If we keep putting guys on base like we did tonight, I'll take our chances with getting the big hit for the rest of the series."

James faced only one batter in the fifth inning when the Astros were up 3-1, but it was one of the more dramatic moments of the game. After Asdrubal Cabrera had ripped a two-out double to right field to put runners at second and third and knock Greinke from the game -- Josh Reddick made a nice bare-hand grab as the ball bounced off the wall to hold Adam Eaton at third -- James came in to face Zimmerman.

James got ahead with two high strikes and then threw a 98 mph heater up and in that spun Zimmerman on his rear end and elicited a chorus of boos from the crowd (and a visit from the trainer and manager Dave Martinez). Zimmerman regrouped and ran the count full, but James threw a riding 3-2 changeup to get Zimmerman swinging. James had thrown the same pitch at 2-2. You don't see too many back-to-back changeups in righty-on-righty situations, particularly from a guy who throws 98. Interesting sequence there from James and catcher Robinson Chirinos.

"Good pitch," Zimmerman said. "The 2-2 one didn't move as much as the 3-2 one. But I like my at-bat there. Face a guy throwing 97, 98 mph with a good slider, to battle back and get it to a full count. Sometimes you just have to tip your cap. 3-2 changeup. That's a pretty good pitch right there."

Martinez faced a tough managerial decision when starter Anibal Sanchez came up to the plate in the bottom of the fourth with Victor Robles on third and one out and the Astros up 2-1. There were defensible decisions both ways on whether to hit for him.

Don't let him hit: Getting that run in there is vital and Sanchez is one of the worst-hitting pitchers in the majors (.115 this year with 24 strikeouts in 52 at-bats, .084 in his career). Plus, the top of the Houston lineup was coming up in the fifth for the third time through the order, and Sanchez's numbers this season were terrible the third time through (.587 OPS allowed the first time, .702 the second time and .923 the third time).

Let him hit: Have you seen the Nationals' bullpen? Take out Sanchez and you still have to get 15 more outs, with games Saturday and maybe Sunday. Plus, with the infield playing in, maybe Sanchez can squeeze in a lucky hit or something.

My initial thought was Martinez made the right move, that 15 outs is a lot to ask from that bullpen crew. But after looking up Sanchez's third-time-through numbers and knowing the Astros had put a lot of baserunners on against him, I think the right call was going to the pinch hitter and then giving Joe Ross or Wander Suero the fifth inning and hoping for the best.

Sanchez would come to the plate; he ended up striking out on a bunt attempt, and Trea Turner squibbed a ball in front of the plate that Greinke made a nice play on for the final out. Sanchez then gave up a run in the fifth and Chirinos a his home run in the sixth, so Martinez's decision didn't look great in retrospect, but I don't think he deserves to get hammered for it.

"I seriously thought about it," Martinez said. Indeed, before Robles hit his RBI triple,Tanner Raineyhad started getting loose in the bullpen. "I liked the way Sanchez was pitching. He was only at 60 pitches. ... I thought at 2-1 the game was still fairly close."

Another weird move came when Greinke batted in the second inning with runners on first and third and one out. Unlike Sanchez, Greinke is probably the best hitting pitcher in the majors. He hit .280 this season and slugged .580, with three home runs and eight extra-base hits in 50 at-bats. Oddly, Greinke laid down a bunt, which moved Chirinos to second but kept Reddick at third base. Given that Sanchez doesn't throw hard, it seemed like the perfect opportunity to have Greinke swing away (there were only 22 sacrifice bunts in the majors all season in that situation). George Springer then grounded out.

How to explain the bottom of the sixth? Well ... there were 31 pitches before a ball was put into play. Yes, this game lasted more than four hours. The inning went strikeout, walk, stolen base, walk, pitching change, a foul ball that rebounded into Turner's vulnerable area, a visit from the trainer, a strikeout and finally Eaton grounded out to first to end the inning. Not the kind of inning that makes baseball fun again.

It's always funny how itchy managers are with their bullpens in the postseason. One bad outing often means you get demoted in the pecking order. Ryan Pressly was great for the Astros in the regular season, and even though manager AJ Hinch said he threw the ball well in Game 2 when he got nickel-and-dimed in that six-run inning, he didn't appear in this game. Meanwhile, the much-maligned Nationals bullpen received two scoreless innings from Ross in his first appearance of the postseason and a clean nine-pitch inning from Suero. That can at least give Martinez a little confidence if he has to go deeper in his pen than just Rainey, Sean Doolittle and Daniel Hudson.

With Urquidy starting, that means Hinch will probably need some innings from his bullpen, although Urquidy looked really good against the Yankees in the ALCS. There are suddenly some questions here, however. Peacock walked two batters and had to be pulled in favor of Harris after recording only one out. Pressly hasn't been the same since injuring his knee in August and has given up 12 hits and eight runs in 3 innings in the postseason. Unless Urquidy can go five or six innings, Hinch will have to figure out how to get through 27 outs.

Alex Bregman went 0-for-5, including 0-for-2 with runners in scoring position. He did homer in Game 2, but he's down to .208/.367/.396 in scoring position. He also faced the rare indignity of the Nationals intentionally walking Michael Brantley to load the bases in the sixth inning to face him. Fernando Rodney induced a hard 102 mph groundout to shortstop. Hard contact, bad luck. Bregman also lined out on a 99.3 mph shot to shortstop in the ninth, so the swings looked a lot better than the box score line.

There were five stolen bases in Game 3 -- four by the Astros as they ran on Nats catcher Kurt Suzuki, who threw out only 10% of baserunners this season (they were 45 of 50 against him). Suzuki later left because of an injury and Yan Gomes usually catches Corbin anyway.

"I just felt a little thing in my hip on that block and I would be doing a disservice to the team if I was still playing," Suzuki said. "I tried to fight through it but I just, I couldn't, and I wouldn't have been helping the team."

Still, keep an eye on the running game the rest of the series. The Nationals led the NL in steals during the season. Who says small ball is dead? 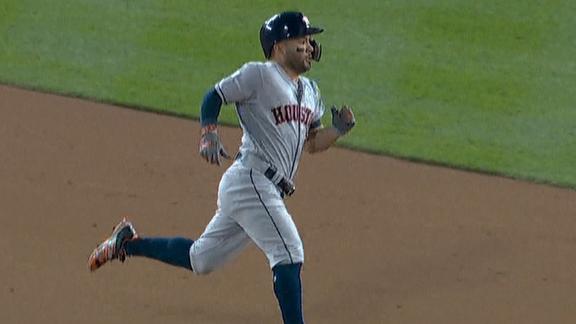 Altuve doubles, Brantley drives him home
Jose Altuve reaches third base to lead off the third inning and Michael Brantley follows with an RBI single to give the Astros a 2-0 lead over the Nationals.
Report a correction or typo
Related topics:
sportsespnmlbhouston astroswashington nationals
Copyright © 2020 ESPN Internet Ventures. All rights reserved.
More Videos
From CNN Newsource affiliates
TOP STORIES