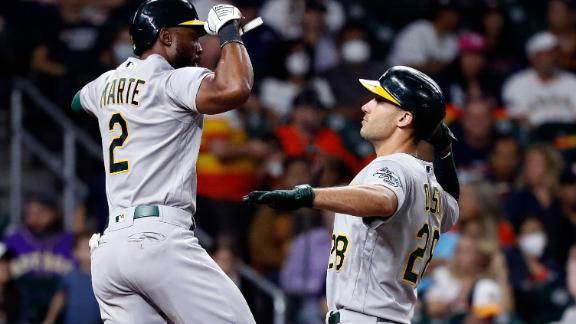 Houston leads the White Sox by one game for home field in their best-of-five Division Series matchup next week. The AL West champion Astros also own the tiebreaker after going 5-2 against AL Central champion Chicago this season.


"We wanted to win today," said Jake Meyers, who had two hits and drove in two runs for Houston. "We had an opportunity to win today. ... That's something we want to do. That's the next goal in the next few games is to hopefully get both of those Ws."

Pinder hit a solo shot in the fourth and Olson had a two-run drive in the sixth to increase Oakland's advantage to 4-1.

"We still have games to play," Olson said. "When we're out there, we're going to compete. That's what we do. It's all we know really. To push those runs across, we got a couple big hits. A pretty solid win against a good team."

Pinder added an RBI grounder as the A's scored four times in the eighth for an 8-2 lead.

"He had a terrific season; he really did," Oakland manager Bob Melvin said. "Overall, he finished the year with a less than four ERA and the innings he gave us, one of the better starters in the American League."

Lou Trivino got four outs for his 22nd save. He allowed a leadoff double in the ninth to Yordan Alvarez and walked Carlos Correa, but recovered to strike out Jose Altuve and induce groundouts by Michael Brantley and Meyers to end it.


"He had to come in a tough situation and then he had a couple guys on and nobody out in a tough situation and all their guys coming off the bench, too," Melvin said. "That ended up being a really good outing. He ended up doing it a little differently, too, throwing some changeups and curveballs and they weren't all sinkers. He had to dig deep to get through this one today."

The Astros scored four times in the eighth. Meyers hit an RBI single and Jason Castro followed with a three-run homer.

Aledmys Díaz gave the Astros a 1-0 lead with an RBI single in the first. Jose Siri, who led off with a triple and scored on the single, exited in the second with a right hand injury.

"I was surprised when he came in," Houston manager Dusty Baker said. "A lot of times you hurt yourself, and you don't feel it until later because your adrenaline kicks in. He walked by me and said, 'I hurt my hand.' He went into the training room, and the trainer came out and said I had to take him out of the ballgame."

Valdez said through a translator that he through he did not use his curveball as much as he should have, and that might have been why he gave up four runs.

"We were trying to take him as far as we could but not overstretch him, so he can be ready for the playoffs," Baker said. "He was good. He had a really good curveball early."

Athletics: OF Ramón Laureano had successful core injury surgery on Thursday, Oakland announced Friday. Laureano will return to Arizona to resume his rehabilitation, with the expectation he will be ready for spring training, Oakland said. ... INF Vimael Machín was placed on the 10-day injured list with a stomach illness that is not COVID-19 related. INF Pete Kozma was selected from Triple-A Las Vegas to take Machín's spot on the roster.

Astros: Baker got a good report on RHP Zack Greinke's rehab assignment on Thursday, but said the team is going to see how he feels before deciding the next step. Greinke threw two scoreless innings for Triple-A Sugar Land on Thursday.