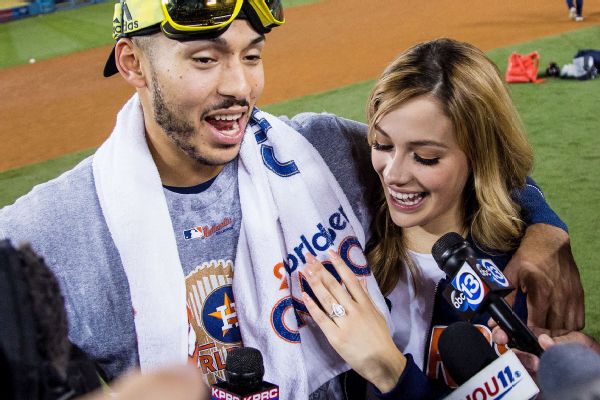 WEST PALM BEACH, Fla. -- Carlos Correa skipped the Houston Astros' visit to the White House to help arrange for more relief supplies for shipment to hurricane-ravaged Puerto Rico, where he grew up.

Correa and closer Ken Giles did not attend Monday's ceremony in Washington, D.C., that honored the Astros' 2017 World Series title. The Astros said Giles had a family commitment.

"It was not politics or anything," Correa said Tuesday. "It was just that the day off was perfect to be able to provide some help for the people in Puerto Rico in need."

Puerto Rico was damaged in September by Hurricane Maria. With the assistance of Astros, Jim Crane, Correa helped send a plane of supplies to Puerto Rico in October.

Correa's family and his fiance, Daniella Rodriguez, joined him on Monday to help finalize the next shipment, which he hopes will depart South Florida via ship before the end of spring training.

"I didn't think it was right for me to go and talk to the president about Puerto Rico when we were going there for the team, for the amazing year we had and for what we brought to the city of Houston," Correa said. "It's an honor to be invited to the White House. I want to thank the president for all the help he provided to my second hometown, which is Houston, and some of the help he's provided to Puerto Rico, but we're still in need in Puerto Rico."

A first-time All-Star, Correa said his relief efforts will continue into the season.