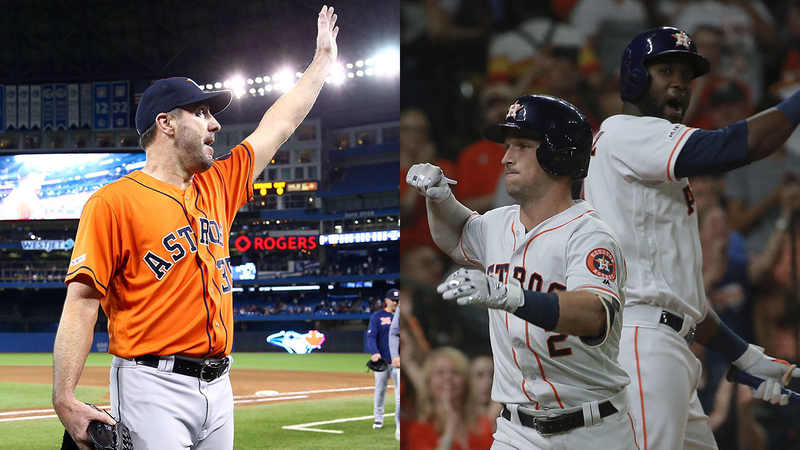 HOUSTON, Texas (KTRK) -- Before they have a shot at reclaiming the biggest prize in the Majors, the Houston Astros picked up hardware for two of their most productive batters and an ace who threw his third career no-hitter.

Alex Bregman and Yordan Alvarez were named American League Player of the Month and Rookie of the Month for August, respectively. Pitching ace Justin Verlander picked up AL Pitcher of the Week for the week that concluded with his no-hitter against the Toronto Blue Jays on Sunday.

For Alvarez, the August honor marks the third consecutive month that he captured the Rookie of the Month award. He is the first Astro to claim this victory and the first of any team since Aaron Judge did it in 2017. Alvarez sent nine home runs to the outfield during August, while also batting in 26 runs. He already leads all AL rookies with 22 home runs this season.

With another homer, the Cuban product will break Carlos Correa's Astros record for home runs by a rookie in a season.

Of course, not to be outdone, Verlander rode the wave of his Sept. 1 no-hitter to win his ninth career weekly award. The right-hander struck out 14 batters and allowed just one walk in a series-closing game in Toronto. He's also one of just six pitchers in MLB history to toss at least three no-hitters.

Between his two starts for his award-winning week, Verlander had a 0.00 ERA in 14.1 innings.

Verlander's next start is Saturday at home against Seattle.