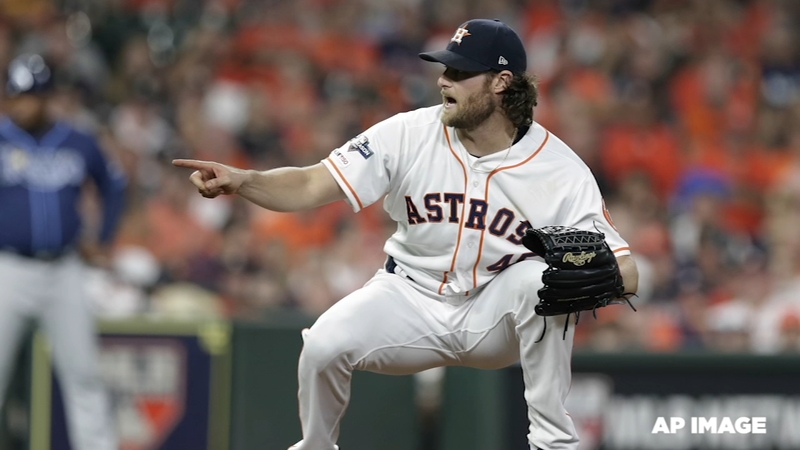 HOUSTON, Texas (KTRK) -- After dazzling performances from Justin Verlander and Jose Altuve in Game 1 of the ALDS, the Astros looked to take a commanding 2-0 series lead Saturday against the Rays and did just that with a 3-1 victory.

Carlos Correa had a play you might see make its rounds on social media on the first out of the game. He threw Yandy Diaz out from deep in the SS hole in the left field grass.

The Astros nearly opened up scoring in the third inning. Altuve was on second with two outs and while Michael Brantley struck out, it was on a wild pitch. Brantley tried running to first while Altuve sprinted home, but couldn't make it in time.

Scoring finally broke through in the fourth inning when Alex Bregman sent one to the Crawford Boxes. He knew it was gone immediately as he stared it down. It was his seventh career postseason HR.

Blake Snell, the starting pitcher for the Rays, was taken out after the Bregman HR with one out in the fourth.

It seemed the Astros would begin rolling in the fifth, but Altuve grounded into a double play with one out while Kyle Tucker was on third and Martin Maldonado was on first.

The single that Maldonado hit actually hit a stool the ball boy sits on. Some felt the ball would've gone all the way to the LF corner and given the Astros another run.

Through five innings, Gerrit Cole already had 10 K's on the night. Dating back to the regular season, it marked his 10th consecutive start of 10+ K's.

Correa hit a double that sent Gurriel to third base with zero outs to start the bottom of the seventh. Maldonado was able to send Gurriel home with an RBI single and extended the Astros' lead to 2-0.

Cole flat out delivered on Saturday. It was one of the best pitching performances in Astros history.

Roberto Osuna entered for him with runners on first and second with two outs, but got a strikeout to end the inning.

Correa got an RBI single to send Bregman home that gave the Astros a 3-0 lead in the bottom of the eighth.

The Rays had to use six pitchers on the night, trying to find answers as the Astros began to roll.

There was a bit of a scare in top of the ninth. The Rays loaded the bases with 0 outs in the inning, and Osuna gave up one run in the jam.

Will Harris entered the game as the bases were loaded once again with one out. He was able to get a strikeout and a ground-out to finish it off.

Game 3 is set for Monday afternoon. Zack Greinke gets the start for the Astros.