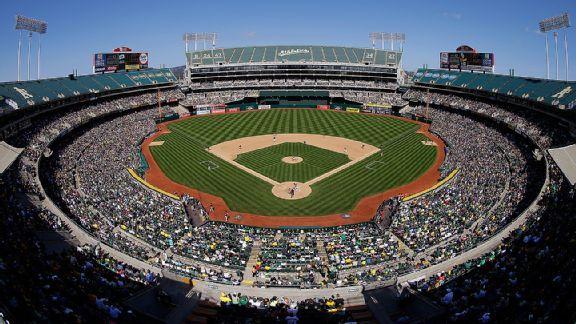 OAKLAND, Calif. -- The Oakland Athletics, after reportedly receiving permission from commissioner Bud Selig to move from the Coliseum, have finalized an agreement on a 10-year extension to stay there through the 2024 season.

The deal settles all outstanding issues between the two sides, including a dispute of past rent owed by the A's. The A's will spend more than $10 million on a new scoreboard and the Coliseum Authority will pay for any structural improvements that will be in place by Opening Day 2015.

According to the San Francisco Chronicle, Athletics owner Lew Wolff told city and county officials via email on Wednesday night that he had received permission from Selig to immediately "seek a temporary or permanent location outside the city of Oakland" unless a new stadium deal was agreed upon.

The Oakland-Alameda County Coliseum Authority restarted negotiations Thursday morning, according to the Chronicle. A planned vote on a 10-year lease was delayed on June 27 after four of the eight City of Oakland representatives did not show up for the meeting.

Oakland Mayor Jean Quan and City Council president Pat Kernighan said the vote in late June was delayed because city officials felt they needed more time to negotiate terms that would keep the team in Oakland and protect residents' interests.

The O.co Coliseum, which was built in 1966 and has been home to the Athletics since 1968, has had multiple sewage problems in the past year and an outage affecting the outfield lights on June 14.