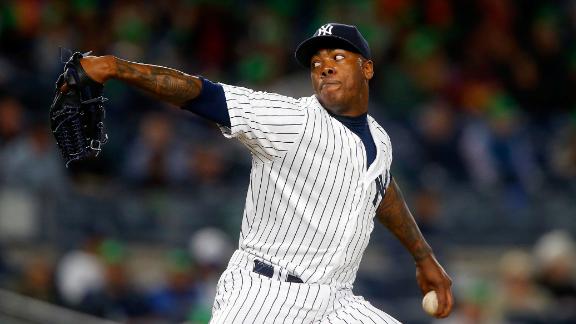 NEW YORK --Yankeescloser Aroldis Chapman received a positive reaction from fans as he made his way to the mound Monday for the first time since completing his 30-game suspension for violating Major League Baseball's domestic violence policy.

What was left of the announced crowd of 41,243 in the ninth inning "oohed" and "ahhed" as Chapman hit 100 or 101 mph on each of his first four pitches. He struck out the first two batters he faced before allowing a run. He finished out the 6-3 victory over the Kansas City Royalsbut did not record a save.

"It was incredible," Chapman, speaking through an interpreter, said of the reaction.

Chapman, 28, sounded relieved that the response was positive. From the beginning of spring training, Chapman and Yankees manager Joe Girardi have been continually asked about the fallout from the domestic violence allegations against Chapman. It has been the biggest off-the-field issue for the club.

By Monday, the home fans were apparently just clamoring to see Chapman pitch.

"I had people over me screaming at me to bring him into the game," Girardi said.

In the winter, the Yankees jumped at acquiring Chapman, a four-time All-Star, after the Cincinnati Reds put him in the discount bin when the domestic violence allegations became public. Chapman was accused of choking his girlfriend and firing eight shots from a handgun in his garage. No charges were filed by Davie, Florida, police.

The case had scuttled a potential deal that would have sent Chapman to the Los Angeles Dodgers.

Instead, the Yankees added Chapman to the late-inning combination of Andrew Miller and Dellin Betances. The Yankees liked the idea of having Chapman fill the role of closer, with Miller and Betances able to step in when Chapman is not available.

On Monday, Betances and Miller warmed up, but were only spectators.

"It was electrifying," said Betances, sounding like a fan talking about Chapman. "Everybody, as soon as he started throwing the ball in the bullpen, the whole crowd got up and took out their phone. Everybody was on the top step. It was definitely fun to watch."

Girardi said that Chapman will be available to pitch again Tuesday, in what could become a late-night event in the Bronx because of Chapman's velocity.

"I think we all take a look at the board to see what it is," Girardi said of Chapman's fastball. "We have some guys in the back end of that bullpen that throw really, really hard. To see that 101, it is not something you see every day."

The Yankees gave up right-handers Caleb Cotham and Rookie Davis and infielders Eric Jagielo and Tony Renda to acquire Chapman.

If the Yankees remain in last place, there is some thought they might trade Chapman at the deadline. Chapman is making $11.325 million this year and can become a free agent at the end of the season.

Chapman debuts for Yankees in victory over Royals
Playing in his first game as a Yankee, Aroldis Chapman surrenders an earned run and strikes out two batters as New York defeats Kansas City 6-3.
Related topics:
sportsespnall starmlbaroldis chapmandomestic violence agreementnew york yankeesjoe girardisuspensioncloser
Copyright © 2022 ESPN Internet Ventures. All rights reserved.
TOP STORIES
Daylight shows home destroyed after standoff with shooting suspect
What we know about man accused of shooting 3 HPD officers
Suspect arrested after 30-minute chase ends on I-45 in Texas City
Clouds clearing today, sunny through the weekend with rain next week
5 people charged in connection with Pct. 5 corporal's murder
How many times can I reuse my N95 mask?
Decades after TV anchor disappears, convicted rapist denies connection
Show More
Driver dies after slamming into 18-wheeler's trailer on US-59
Woman shot in the shoulder during robbery set up in SW Houston
Prepare for a major closure at I-69 and 610 West Loop this weekend
Officers escort body of corporal killed in ambush to funeral home
ABC13 obtains HPD scanner traffic of chase that led to shootout
More TOP STORIES News