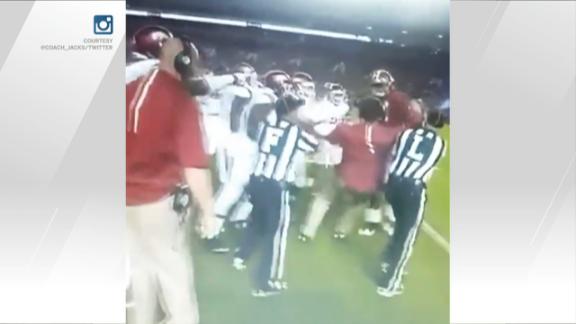 A day after being criticized for actions depicted in a video that was heavily circulated on social media on Monday, Arkansas coach Bret Bielema said Tuesday that he spoke with SEC commissioner Greg Sankey about the issue and that he only intended to prevent a confrontation between players from both teams.

Bielema, who stepped between Arkansas defensive linemanJaMichael Winstonand Alabama offensive lineman Cam Robinson as shown here, appeared to instigate a flag, which was thrown on Robinson for unsportsmanlike conduct.

Asked by reporters on Tuesday whether he instigated, Bielema responded "I'm not that quick," according to arkansasonline.com.

Bielema said he sensed the game getting "chippy" and had a feeling a confrontation was imminent so he decided to attempt to prevent one.

"We picked the ball off and came down and then I remember we were getting close to the sideline and again, 74 [Robinson] and one of our players were coming. Somebody flipped over another one and I got up and I saw a lot of our players coming over, and I knew something good wasn't going to happen. So I jumped in front; I faced my players because I wanted to be nonconfrontational, and the rest is what happened.

Bielema said he was pushed.

"I kinda jumped in front and then there's a lot of things going on," Bielema said. "I know I got pushed out. I don't know if whatever happened, but I turned around, and that's when I saw the flag and knew that something happened."

Sankey said in a statement that the penalty was not associated with Bielema's actions in relation to Robinson and that he understood the coach's intent.

"I visited with Bret over the phone on Monday, and we discussed the play that has now become widely reviewed through a brief video clip," Sankey said. "Football is played in an intense competitive environment, and I reminded him of the need for head coaches to resolve with their own players' issues that may arise, which was his intent. The unsportsmanlike penalty assessed on the play was not directly associated with Bret's efforts to intervene at the end of the play, and we are moving forward in a positive manner."

Bielema said he voiced concern with Sankey over the source of the video because it appears to have originated from Arkansas' sideline. The video was posted to Twitter by Pelham (Alabama) High School defensive backs coach Anthony Jacks, but Jacks told ESPN.com on Monday that he does not own the video. He recorded it on his phone from the owner of the video but declined to identify the owner who originally shot the video.

As for the criticism, Bielema shrugged it off as he has other criticisms in the past.

"Bring it on baby," he said. "It's just what it is when you're 2-4. One of those things, people love to ... hate. Sometimes it comes out in the most unusual ways that you just are kind of amazed that people react that way and hopefully it makes them feel better."