Angelique Kerber battles to move on to third round in Melbourne 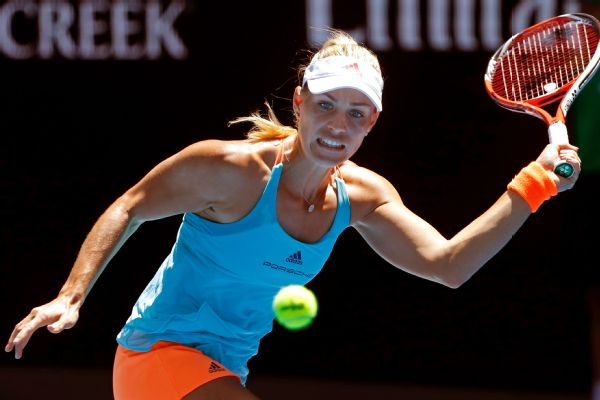 MELBOURNE, Australia -- Last year, Angelique Kerber became the oldest first-time No. 1 in women's tennis, and Wednesday she celebrated her 29th birthday with a nervous 6-2, 6-7 (3), 6-2 victory over Carina Witthoeft.

It was the second consecutive three-set affair for Kerber, who was also pushed to the limit by Lesia Tsurenko in the first round.

"To have this pressure, it's a privilege," Kerber, a native of Germany, said afterward. "It's new for me, but I think I am dealing with it pretty well."

This was Kerber's 16th straight win at a hardcourt major, going back to her triumphs at the 2016 Australian Open and US Open.

"Actually, I'm always playing on my birthday," Kerber said. "I'm getting older, but, yeah, I think I will have a great day."

Kerber managed to avoid an upset of historic proportions; Witthoeft would have been the fourth-lowest-ranked player in the Open era to defeat a world No. 1 at a major.

The match ran 2 hours, 8 minutes on a day that was some 30 degrees cooler than Tuesday. Kerber broke Witthoeft's serve on seven of 14 opportunities.

"I was doing, I think, a lot of mistakes like in the important moments," Kerber said. "But at the end, I'm happy that I won the match. It was not so easy. The [breezy] conditions were, like, also a little bit difficult today."

Next she'll play Kristyna Pliskova in Friday's third round, but she said she was not concerned about already playing two three-set matches.

"I think I'm fit," Kerber said. "I am prepared for playing, like, two, three hours, so that's not a problem. Tomorrow I have a day off, so it's not a big deal."

No. 11 Elina Svitolina had a 6-4, 6-1 win over U.S. qualifier Julia Boserup to advance to a third-round match against No. 24 Anastasia Pavlyuchenkova, a 6-2, 6-2 winner over fellow Russian Natalia Vikhlyantseva.

Eugenie Bouchard is back in the third round at Melbourne Park for the first time in two years, defeating China's Peng Shuai 7-6 (5), 6-2.

Bouchard, who reached the semifinals of the Australian Open in 2014, finally closed it out after Peng saved three match points on Bouchard's serve at 5-1 in the second set.

Following her breakout year in 2014, which also saw her reach the Wimbledon final, Bouchard struggled to make it past the fourth round at the slams. Her best result last year was the third round at Wimbledon.

Her next opponent will be eitherCoCo Vandewegheor Pauline Parmentier, who played later Wednesday.

French Open champion Garbine Muguruzaadvanced to the third round with a 7-5, 6-4 win over American Samantha Crawford. Muguruza clinched the match on her first match point when Crawford netted a forehand.

The Spaniard will play Anastasija Sevastova in the third round.