Andy Murray to replace Novak Djokovic as No. 1 in world rankings 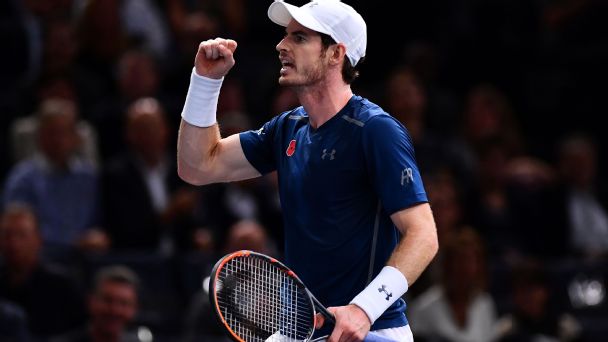 PARIS -- Andy Murray will hold the coveted No. 1 spot for the first time when the ATP rankings are published Monday after advancing to the Paris Masters final without playing a single point.

Murray benefited from Milos Raonic's withdrawal from the tournament -- just one hour before the big-serving Canadian was scheduled to take on the 29-year-old Briton in the semifinals on Saturday.

Raonic said he withdrew because of a right leg injury he picked up during his quarterfinal win over Jo-Wilfried Tsonga.

"This morning I had trouble waking up and getting out of bed ... Did some tests. Did an MRI half an hour ago, let's say. They found that I have a tear, Grade 1 tear in the right quad,'' Raonic said. "Unfortunately, I'm not able to compete against Andy today.''

Murray only needed to make the final in Paris to take top spot off Novak Djokovic. He is guaranteed to hold at least a five-point lead over Djokovic, who lost in the quarterfinals in Paris. Their fight for supremacy will resume in London at the ATP finals later this month.

Murray will become the first Briton to hold the top spot, no matter the result of Sunday's final. He will also be the oldest first-time No. 1 since John Newcombe at age 30 in 1974, and the 26th player to reach No. 1 since the rankings started in 1973.

"It feels a little bit strange how it's happened today and obviously unfortunate that Milos is injured," Murray said. "To get to this stage is about 12 months of tournaments. The last few months have been the best of my career and I'm very proud to get to this moment."

Roger Federertweeted his congratuations to Murray on his ascent to No. 1 in the world rankings.

Reaching the summit has been a long process for Murray, who has spent 76 weeks at No. 2, a position he reached for the first time in 2009.

A turning point in the Scot's career came when he hired Ivan Lendl as a coach in 2011. During their first stint together, Lendl managed to turn Murray from a four-time Grand Slam runner-up into a two-time major champion. Murray won Olympic gold in London in 2012 and the US Open title later the same year. In 2013, he became the first British man to triumph at Wimbledon in 77 years.

Before winning the US Open, Murray was 0-4 in Grand Slam finals. Only one other man in the Open era, which began in 1968, lost his first four major titles matches _ Lendl. The Czech-born baseline player then went on to win eight Grand Slam singles titles during a 17-year career, spending 270 weeks at No. 1 in the world rankings.

Murray replaced Lendl with Amelie Mauresmo in 2014. Though the Frenchwoman helped him climb back up the rankings following back surgery, the partnership ended in May this year without any new major title. The Scot reunited with Lendl before Wimbledon, a week after Murray lost to Djokovic in the French Open final.

The move paid off immediately as Murray claimed a second title at the All England Club and a second gold medal at the Rio Olympics. Last week in Vienna he won the Erste Bank Open for his third straight tournament and has a 45-3 match record since the French Open.

"I feel like getting to number one ... it wasn't about this week, or about last week. It's been many years of work to get here," Murray said. "The most satisfying thing is it's been such a difficult thing to do in my career.

"In the beginning of my career, I always wanted to win a Grand Slam, but now that I've gotten older, getting to number one was something I have tried to do. I needed to improve my consistency and the last couple of seasons I have done that. I'm happy to have done that."

Djokovic held the top spot for 122 consecutive weeks. But after winning the French Open for the first time in June, his form has taken a dip. He lost in the third round at Wimbledon, and in the first round of the Olympics. At the U.S Open, he won the first set in the final but Stan Wawrinka rallied to beat him.

"He's definitely a player who deserves that,'' Djokovic said about Murray on Friday. "Undoubtedly, much respect for what he has done. We have known each other since very, very early days. We were, I think, 11 years old when we first played against each other. And to see how he has raised his level in the last 12 months is quite extraordinary.''

One person was quick to congratulate Murray on Saturday -- his mother Judy.

"You've come a long way baby,'' Judy Murray tweeted, with an old photo of the two of them on a tennis court.

The Associated Press and the Press Association contributed to this report.
Related topics:
sportsespnnews uk tennisandy murraymilos raonicnovak djokovictennisworld no1espnw
Copyright © 2022 ESPN Internet Ventures. All rights reserved.
TOP STORIES
Daylight shows home destroyed after standoff with shooting suspect
What we know about man accused of shooting 3 HPD officers
Suspect arrested after 30-minute chase ends on I-45 in Texas City
Clouds clearing today, sunny through the weekend with rain next week
5 people charged in connection with Pct. 5 corporal's murder
How many times can I reuse my N95 mask?
Decades after TV anchor disappears, convicted rapist denies connection
Show More
Driver dies after slamming into 18-wheeler's trailer on US-59
Woman shot in the shoulder during robbery set up in SW Houston
Prepare for a major closure at I-69 and 610 West Loop this weekend
Officers escort body of corporal killed in ambush to funeral home
ABC13 obtains HPD scanner traffic of chase that led to shootout
More TOP STORIES News