Altuve vs. Kershaw could be the stuff of legends 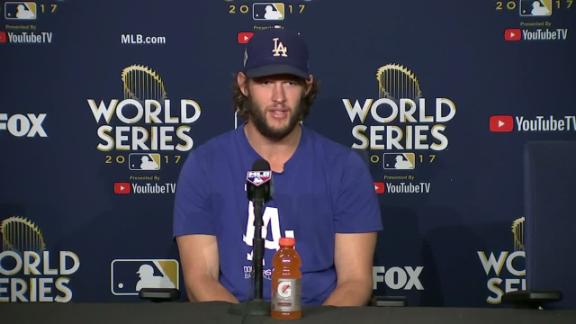 LOS ANGELES -- The World Series is the biggest stage of baseball, one where legends are crowned if not quite made. But what happens when legends clash?

The Los Angeles Dodgers and the Houston Astros make for a compelling matchup of contrasting team strengths. Those differing strengths are comprised of the contributions of a lot of different players who will go toe-to-toe over the next few days.

Baseball almost never boils down to a single player-versus-player matchup, but let's pretend that it does in the style of, say, an NBA Finals matchup like Bird versus Magic. In a sport where dozens of discrete matchups decide every game, you rarely can isolate the one that will decide a contest ahead of time.

If we could isolate that key matchup, we'd be focused on the one between Dodgers ace Clayton Kershaw and Astros dynamo Jose Altuve. You'd be hard-pressed to come up with a better batter-pitcher matchup in any pairing of any two teams across the big leagues.

Since 2014, only Mike Trout has a higher offensive WAR (34.9) than Altuve (26.8). During that same span, Kershaw's pitching WAR (25.2) ranks third, just behind Max Scherzer (26.6) and Corey Kluber (26.0). Even in a seven-game series, this is a matchup you can really count on seeing maybe five or six times, so pay attention when it happens.

These are two of baseball's more advanced performers at their respective crafts. This won't be the first time they've faced each other, as their careers overlapped with the end of Houston's time in the National League. In fact, Kershaw and Altuve have a pretty good history as far as pitcher-hitter samples go.

Still, the 15 times they've faced each other is far from conclusive. Altuve is 6-for-15 with four doubles in those encounters, with no walks and no RBIs.

The pair were asked about each other obliquely during Monday's media day at Dodger Stadium.

"He hits everything pretty well," Kershaw said of Altuve. "I think that he's super aggressive. But at the same time he hits a lot of different pitches. It's not a guy that just hits fastballs well or just hits breaking ball well. He does everything pretty evenly throughout the board.

"[It's] just a matter of execution with him. You're just trying to mix up spots, pitches, locations, don't give him any predictable counts, predictable pitches. He's a tough out. I think he's one of the toughest outs in the game. You just can't give in to him."

Meanwhile, Altuve was a little more circumspect in discussing Kershaw.

"He's a really good pitcher," Altuve said about Kershaw. "It's a big challenge for us. Sure, we know he's one of the toughest guys out there, but we also have those guys on our side like [Justin] Verlander and [Dallas] Keuchel."

Altuve isn't giving away any trade secrets here, so it's up to us to figure out what those previous matchups tell us about how Kershaw should attack baseball's best current pure hitter.

First of all, the existing history tells us that Kershaw needs to make adjustments from whatever he was doing the last time these two faced each other in 2015.

The version of Altuve that Kershaw saw in 2015 was a different one from the one he saw three years earlier. The most obvious difference is the amazing development of Altuve's power. After hitting 21 homers over his first four seasons combined, he has 63 in the three seasons since, not to mention five more in this postseason alone.

Meanwhile, Kershaw has become increasingly susceptible to the long ball. The 23 homers he allowed during the regular season were seven more than he'd ever allowed before. The six homers he has allowed in the postseason are already more than any Dodgers pitcher has ever given up in one playoff year.

Those long balls have to be contextualized: Kershaw has been pitching with sizable leads for the most part during these playoffs and only one of the homers came with a man on base. He has been intent on staying in the strike zone, limiting any damage from homers to a single run. Still, the first challenge for Kershaw will simply be to keep Altuve in the park.

Kershaw is a power pitcher, who now uses his fastball to set up his slider and curveball, with an occasional changeup mixed in. According to the pitch value metrics at FanGraphs, the per-pitch value of the fastball isn't special, not this year. But Kershaw's slider ranked fourth in the majors and the curve was fifth. Still, Kershaw's raw stuff this postseason has been very good and you can't discount his ability to lean on his fastball as needed.

Incidentally, since there are a lot of analytics in this piece, it's a good time to pass along an amusing exchange in Kershaw's media session on Monday. Eno Sarris of FanGraphs asked Kershaw about the depth of his slider and if recent variances in it might be related to the back trouble he has battled this season.

"No," Kershaw said. "I don't know what analytics group you work for, but no."

And we thought the Dodgers were all about the analytics!

As you'd expect of a player who has hit a combined .334 the past four years, Altuve doesn't have any glaring weakness on a particular pitch. On a per-pitch basis, FanGraphs ranks Altuve third among all players against fastballs (just behind teammate Marwin Gonzalez) and 11th against sliders (with teammate Yuri Gurriel ranking fifth).

Altuve isn't quite as accomplished against soft stuff, but he's easily above average. According to TruMedia, Altuve had a 1.013 OPS this season against pitches coded as "hard" and .896 against "soft" pitches. Both figures ranked among the league leaders. So you're not going to get Altuve on pitch selection.* It'll have to be about execution and command.

(*The one pitch type Altuve struggles with is the cutter. Kershaw doesn't throw that, but of course L.A. closer Kenley Jansen feature the nastiest versions of that pitch we've ever seen. Keep that in mind for late in games. Altuve is 0-for-1 against Jansen in his career.)

Really, this is Pitching 101, but the importance of the first couple of Kershaw's offerings to Altuve in any given plate appearance is heightened in this matchup. Altuve walked just 58 times this season, two shy of his career best. He's aggressive, an approach that works well for him because of his elite ability to contact the ball with authority.

Nevertheless, the only way to defeat Altuve is to leverage that aggression against him. Altuve's chase rate this season (32.4 percent) was 4.4 percent higher than the big league average and ranked 111th among 144 qualifiers. Kershaw induced chases 31.5 percent of the time, ranking 10th among qualifying pitchers.

However, it's also important to carefully select just where you're locating a pitch to get Altuve to chase. He's murder in just about every sector of the strike zone, with the exception of low-and-away offerings. He's also terrific at pitches just off the plate -- he'll just punch the ball the other way, and do it with authority. You've got to get him just up and away, or up and in.

Kershaw, for his part, pitches well to every sector in and out of the zone, with the occasional vulnerability on pitches middle-in, where righty pull hitters can get him. He has the arsenal to attack Altuve. As Kershaw himself said, it will be a matter of execution.

We don't know! Seriously, if we could predict the outcome of individual plate appearances, we'd own about four casinos in Vegas by now.

What you might see is Kershaw starting off Altuve with fastballs either up and out of the strike zone, or possibly in on his hands. They have to be quality offerings because if Altuve seizes the early advantage in the count, he's really tough. And if the pitch is in a spot where Altuve can attack, we know he'll be ready to do damage on the first pitch he sees.

If Kershaw can get ahead in the count, he can then try to get Altuve to chase his breaking stuff. You can envision Altuve in those spots flailing at a curveball in the dirt. Or maybe the crafty Kershaw will dust off the changeup he rarely uses but seems to be really effective with when he does.

Every batter-pitcher matchup is a moving target of strengths versus weaknesses, and adjustments versus adjustments. Few of these cat-and-mouse encounters are as compelling as the one of Kershaw and Altuve. The former can go to multiple plus pitches to any part in and around the strike zone. The other can do damage with just about all of that arsenal.

It will be fun to watch. 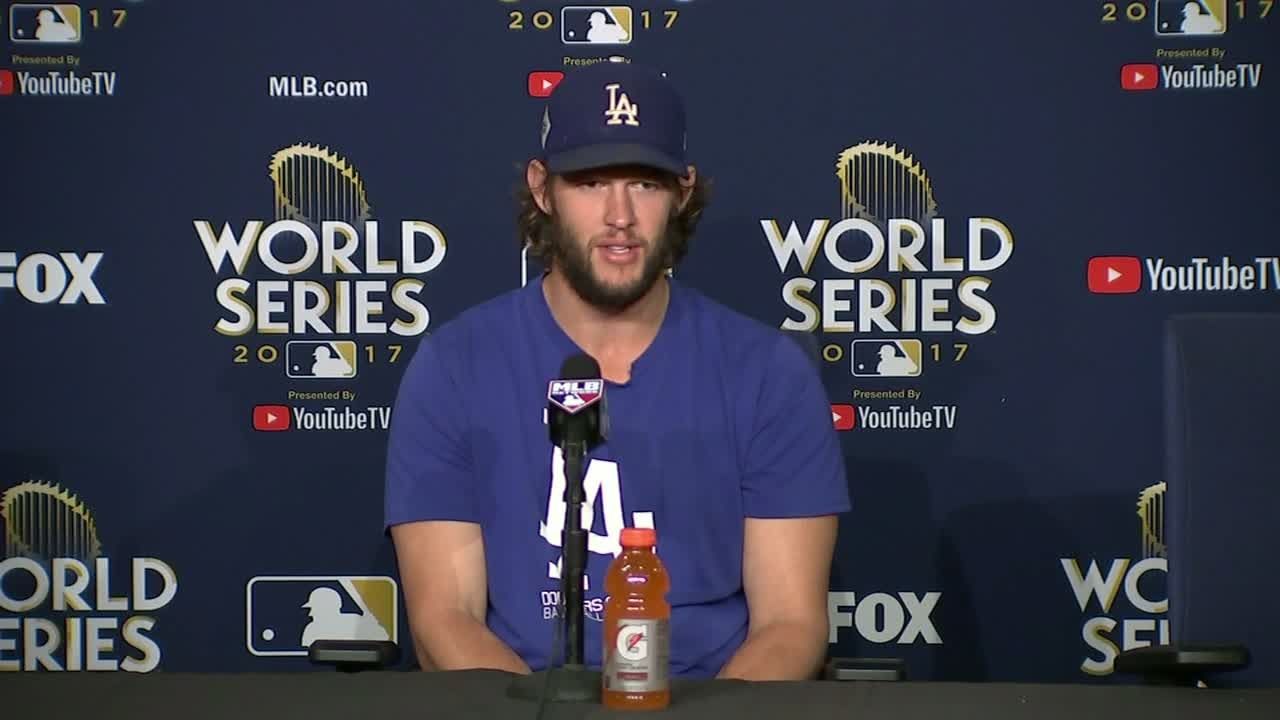