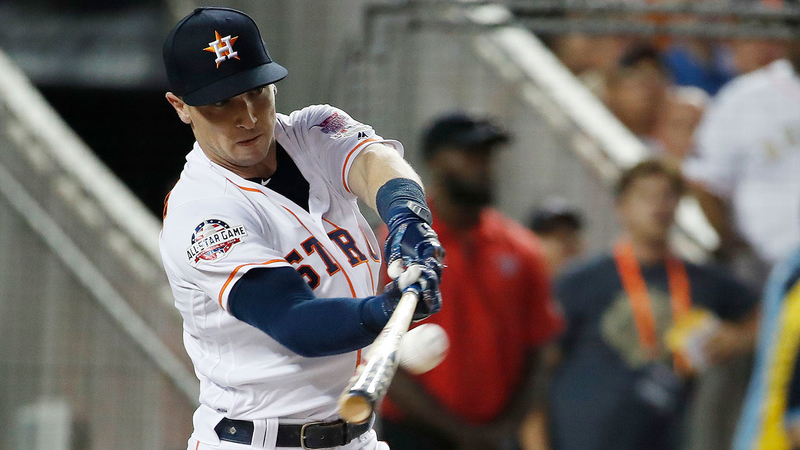 Houston Astros star Alex Bregman is getting a second chance at blasting bombs in this month's Home Run Derby.

Bregman, who launched a team-leading 23rd home run against Colorado on Wednesday, was announced as one of the eight participants in this year's contest the day before the MLB All-Star Game.

Bregman is seeded fourth and will be taking on Joc Pederson of the Los Angeles Dodgers in the first round of the tournament.

The other participants in the contest include Matt Chapman of the Oakland Athletics; Vladimir Guerrero Jr. of the Toronto Blue Jays; Pete Alonso of the New York Mets; Carlos Santana of the Cleveland Indians; Josh Bell of the Pittsburgh Pirates; and Ronald Acuna Jr. of the Atlanta Braves.

Bregman, who is also starting in this year's All-Star Game, was ousted in the first round last year during his Home Run Derby debut.

No Astro has claimed a derby championship since the contest began in 1985. Bregman could break that drought Monday night at Progressive Field in Cleveland. The top prize is $1 million.

You can put seven Astros on the field at the same time for this year's Midsummer Classic.

One has made batters bow down to his heat, while the other debuted in the Majors with a bang.

Report a correction or typo
Related topics:
sportshoustonmlbhouston astros
Copyright © 2021 KTRK-TV. All Rights Reserved.
TOP STORIES
Free college proposal likely to be dropped from Biden's spending plan
Big warm up ahead but another cool front in the forecast
Federal investigators at site of MD-87 plane crash in Waller Co.
White House details plan to roll out COVID vaccines for younger kids
5K run to be held in murdered woman's honor
How residents in this Harris County neighborhood became numb to crime
Nikolas Cruz pleaded guilty to murder in 2018 Parkland massacre
Show More
US expected to authorize Moderna, J&J boosters as soon as today
Houston executive 1 of 21 on board jet when it crashed in field
Americans arrested for trying to board flight in Switzerland
Loved ones remember mom of 3 killed during home invasion
UT Rio Grande Valley offers free tuition and fees to certain students
More TOP STORIES News