ESPN
Former Astros manager AJ Hinch isn't dismissing the idea that Houston's 2017 World Series championship has been tainted by the sign-stealing scandal that cost him his job.

"It's a fair question," Hinch said in an interview with MLB Network. "And I think everyone's going to have to draw their own conclusion."

Hinch and general manager Jeff Luhnow were suspended for one season by commissioner Rob Manfred, who found Houston illicitly used electronics to steal signs during its title run. Team owner Jim Crane then fired both Hinch and Luhnow.

In an excerpt from an interview set to air Friday night, Hinch defended his players' talents but said the clubhouse put itself in a position where its achievements might be blemished.

"I hope over time, it's proven that it wasn't," he said. "But I understand the question. ... Unfortunately, we opened that door."

Manfred's report noted the cheating was "player-driven" and that Hinch did not support it, but also said Hinch didn't share that disapproval with players. Hinch said he was unsure how much the sign stealing might have helped.
"Unfortunately, no one can really answer that question," he said. "I can't pinpoint what advantages or what happened or exactly what happened otherwise. But we did it to ourselves."

Hinch apologized in a statement the day of his firing, but Astros players -- given immunity and thus not punished as part of MLB's investigation -- have been reluctant to say they were sorry. Speaking at baseball's owners meetings Thursday, Manfred said he was not disappointed no players had apologized.

"I think the jury's still out on exactly what the Houston players are going to say," he said, pointing toward spring training as the possible time and place for contrition. 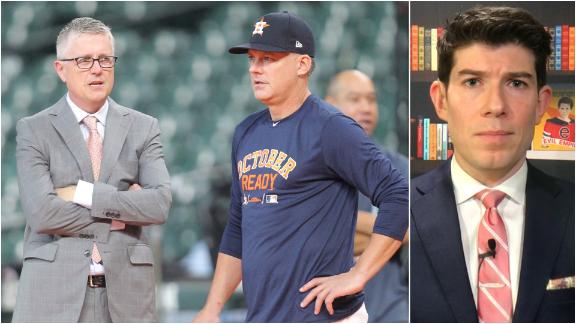