Adrian Peterson: 'I love my kids' 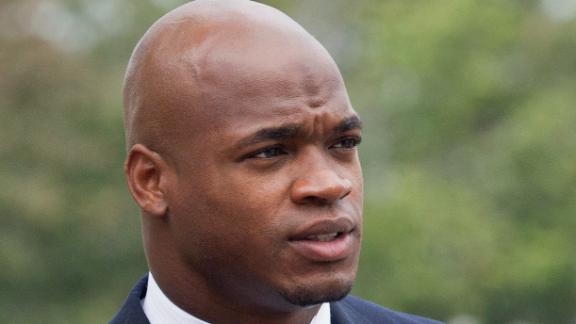 Suspended Minnesota Vikings running back Adrian Peterson expressed regret for injuring his 4-year-old son in an exclusive interview with USA Today Sports published Thursday night, vowing never to use a switch as discipline on any of his children again.

"I won't ever use a switch again," Peterson told USA Today Sportsin his first extensive public remarks since being indicted for reckless or negligent injury to a child. "There's different situations where a child needs to be disciplined as far as timeout, taking their toys away, making them take a nap. There's so many different ways to discipline your kids."

The NFL suspended Peterson for at least the remainder of the season Tuesday, just weeks after he entered a no-contest plea to reckless assault of the child. He will not be considered for reinstatement before April 15, 2015, for violating the league's personal conduct policy.

Commissioner Roger Goodell, in a statement announcing Peterson's suspension, was critical of the star running back, saying, "You have shown no meaningful remorse for your conduct."

Peterson, in the interview, said his focus now is on improving his relationship with his son and proving to others that Goodell's opinion is wrong.

"No one knows how I felt when I turned my child around after spanking him and seeing what I had left on his leg," Peterson said. "No one knows that Dad sat there and apologized to him, hugged him and told him that I didn't mean to do this to you and how sorry I was.

"I love my son. I love my kids, my family. Like I said, after I took the misdemeanor plea, I take full responsibility for my actions. I regret the situation. I love my son more than any one of you could even imagine."

He also said fans shouldn't put him in the same category as former Baltimore Ravens running back Ray Rice, who remains out of the league after video surfaced showing him punching his then-fiancee in a hotel elevator.

"I take full responsibility because I spanked my child. And no matter what my intentions were, I end up leaving those marks on his legs," Peterson said. "That's the bottom line.

"That's not what I tried to do, but that's what ended up happening. Don't put me in the same [category as Rice]."

The NFL's punishment -- which the players' union appealed earlier Thursday -- casts doubt as to whether Peterson will ever play for the Vikings again. The six-time Pro Bowler has spent all eight seasons of his pro career with Minnesota, which selected him with the seventh overall pick in the 2007 draft.

"I know who loves me. The coaches and the players, it's not going to be a problem. I've felt so much support from those guys. The organization, I know there's people in the organization that support me and there's people that I know internally that has not been supporting me," Peterson told USA Today Sports. "Maybe it's best for me to get a fresh start somewhere else."

"I would love to go back and play in Minnesota to get a feel and just see if my family still feels comfortable there. But if there's word out that, hey, they might release me, then so be it. I would feel good knowing that I've given everything I had in me."

Peterson also said he hopes one day to talk with Goodell -- something he didn't do last week when he skipped a scheduled meeting with the commissioner "because I didn't want to go into a situation blind."

"Ultimately, I know I'll have my opportunity to sit down with Roger face to face, and I'll be able to say a lot of the same things that I've said to you," said Peterson, who has been seeing a therapist in Washington, D.C., and a pastor near his home outside Houston who also counsels. "Don't say that I'm not remorseful, because in my statement [after he turned himself into authorities Sept. 13], I showed that I was remorseful. I regretted everything that took place. I love my child, more than anyone could ever imagine."

Peterson confirmed to USA Today Sports that he is the father of six children by six women and admitted it's difficult to be a part of all their lives.

"You can look down on me and say, 'You have six kids. You should not be at this, you should not be at that,'" Peterson said. "This is the cards I've been dealt based off my decisions. I make the best of it by spending time with my kids, any and every opportunity that I have."