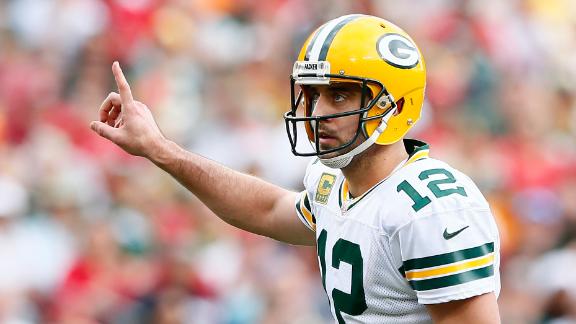 When Rodgers' offensive linemen -- including the reserves and practice-squad players -- and backup quarterbacks showed up at Lambeau Field, they found 55-inch Samsung curved smart TVs, tablets and Beats headphones in their lockers courtesy of their Pro Bowl quarterback.

"He's a hell of a dude, and we've had a hell of a year for each other," said Packers guard Josh Sitton, who like Rodgers was voted to the Pro Bowl on Tuesday. "He just wanted to thank us. We definitely appreciate it. It's nice to be appreciated. We appreciate being appreciated."

Sitton added that Rodgers didn't want anyone to know about the gesture.

Bakhtiari knew about the gesture beforehand but only because he helped Rodgers deliver the gifts to the locker room.

"I may or may not have been an elf the night before," Bakhtiari said.

Rookie center Corey Linsley was perhaps more surprised than anyone. He said he received a text message that said his gift was in, but he had no idea what that meant.

"I mean that's just his characteristic, a characteristic of who he is," Linsley said. "It's not that I expected that by any means, but it's like when he does something like that, it's like, 'That's Aaron. That's who he is.' "

Rodgers is perhaps the leading contender for the NFL MVP and with one game remaining, he has been sacked only 28 times this season, which would be the fewest in any of his seasons as a starter other than 2013, when he missed seven games because of a broken collarbone.

"I mean, just the way he plays, and the way everybody plays around here, the level of excellence, especially by him, you want to play as well as you can for him," Linsley said.

Rodgers wasn't the only player who handed out gifts on Wednesday. Packers cornerback Sam Shields gave UGG boots to all the defensive backs. The other players who didn't get gifts appeared to take it OK, though. When asked where his TV was, Packers receiver Jordy Nelson joked, "It's still at the store, I think."