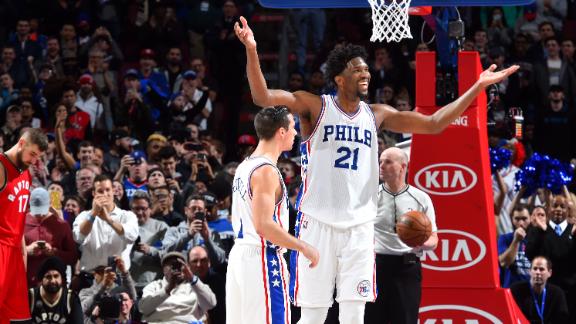 NEW ORLEANS -- Joel Embiid told ESPN Radio on Thursday that winning the NBA Rookie of the Year Award would represent a huge step in lifting him out of the "bad place" he had reached while missing his first two seasons with the 76ers due to injury.

Speaking to ESPN Radio's Meet The All-Stars Show that will air Saturday at 5:30 p.m. ET, Embiid told hosts Marc Kestecher and Marc Stein: "The time that I missed, [those] two years that I missed, I went to such ... I was in a bad place. Coming back and having a chance to be the Rookie of the Year, I think it's going to pay for all the sacrifices that I made."

Expounding on an interview he gave Sports Illustrated on the subject early in the season, Embiid explained that enduring two season-ending foot surgeries in his two seasons -- combined with the death of his teenaged brother, Arthur, in a car crash in October 2014 -- nearly led him to leave the sport and return to his native Cameroon.

"I was such in a dark place, I wanted to quit basketball," Embiid told ESPN Radio. "I just wanted to go back home and just leave everything behind.

"But, you know, coming into [this] season, one thing I thought was just, 'Come and have fun.' It's all about having fun. So all the dark days that I had back then, for me now, I think it's my time to have fun."

Embiid told ESPN Radio that he's "hopeful" of returning to the Sixers' lineup after the All-Star break "if I'm asymptomatic." The 22-year-old has missed Philadelphia's past 11 games (and 14 out of 15 overall) due to a bone bruise in his left knee.

"I'm not worried at all," Embiid said. "It's a bone bruise. [The media] talked about a meniscus [injury], but I'm being treated for the bone bruise.

"Our goal is for me to be asymptomatic and then, when that happens, I'm going to be back on the court."

Embiid added that he hopes to be cleared to play in some back-to-back situations during Philadelphia's final 26 regular-season games because he "wouldn't want to come into next season without having really seen what it's like to play back-to-back."

Embiid has played in 31 games this season and is averaging 20.2 points, 7.8 rebounds, 2.5 blocks in just 25.4 minutes. The fewest number of games played in league history for a Rookie of the Year winner is Patrick Ewing's 50 for the Knicks in 1985-86.

Regarding his success after losing two full seasons, Embiid said: "I think I'm more surprised than everybody else."

In Thursday's sit-down with ESPN Radio, Embiid acknowledged that games played is likely to be a factor in his Rookie of the Year candidacy but expressed confidence that teammate Dario Saric would likely win "that trophy" if Embiid is ultimately bypassed by voters.

"I know my teammate, Dario, he's been playing great lately," Embiid said. "So If I don't win, I know it's going to stay on the team."

The recent knee trouble will prevent Embiid from participating in All-Star Weekend events -- he had been picked for the Rising Stars Challenge -- but he said he wanted to come to New Orleans regardless "to see how it is."