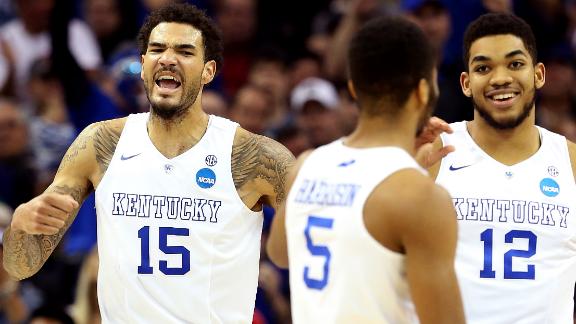 INDIANAPOLIS -- Quinn Buckner says he and his 1976 Indiana teammates aren't chilling any champagne to uncork in celebration of aKentuckyloss.

Instead, the nation's last undefeated college basketball team is eager to end the 39-year wait to add another member to the club -- even if an old rival is trying to make history in the Hoosiers' backyard.

"These are young people who have a terrific opportunity to do something great," said Buckner, an Olympic gold medalist, an NBA champion with theBoston Celtics and now a TV analyst for the Indiana Pacers. "I think for me and my teammates, it's hard to pull against young people."

Perhaps these Hoosiers feel safe knowing that, two years ago, the NCAA named them the greatest team in college history. Or perhaps it's because their reign has survived so many other threats.

Last March, Wichita State was 35-0 when it lost to Kentucky on the first weekend of the NCAA tournament.

In 1991, defending champion UNLV seemed like a lock to finish unbeaten after reaching the national semifinals at 35-0. Then it ran into Duke.

Larry Bird and Indiana State looked like the team of destiny in 1978-79, going 33-0 before falling to Magic Johnson and Michigan State in the title game.

Now comes Kentucky, winner of 38 in a row. To complete their pursuit of perfection, the Wildcats must beat Wisconsin on Saturday in a rematch of last year's semifinal, then beat either Michigan State or Duke on Monday night.

The Hoosiers are surprised the chase has continued for nearly four decades.

"I didn't give much thought about it when it was over," said Tom Abernethy, one of Indiana's starters. "It's crazy, it's gone this long."

Comparing the two teams from such different eras of college basketball is impossible.

Kentucky already has won six more games than Indiana did. The shot clock has virtually eliminated the four-corner offense undermanned teams could use to slow down the Hoosiers, and Kentucky's quest has survived in part because of a 3-point line that didn't exist 39 years ago.

And while Indiana relied heavily on juniors and seniors, the Wildcats have thrived in an era of young players leaving early for the NBA.

Kentucky took on Kansas, UCLA, North Carolina and Louisville before January, blowing through the SEC and surviving a close call against Notre Dame on Sunday.

"My hat's off to them if they make it because they'll be in great company," Wilkerson said. "I don't know if they'll last as long as we did, but they can't take our place."

Does Kentucky Look Vulnerable?
"SportsNation" debates whether the Kentucky Wildcats looked vulnerable in their win against Notre Dame in the Elite Eight of the men's NCAA tournament.