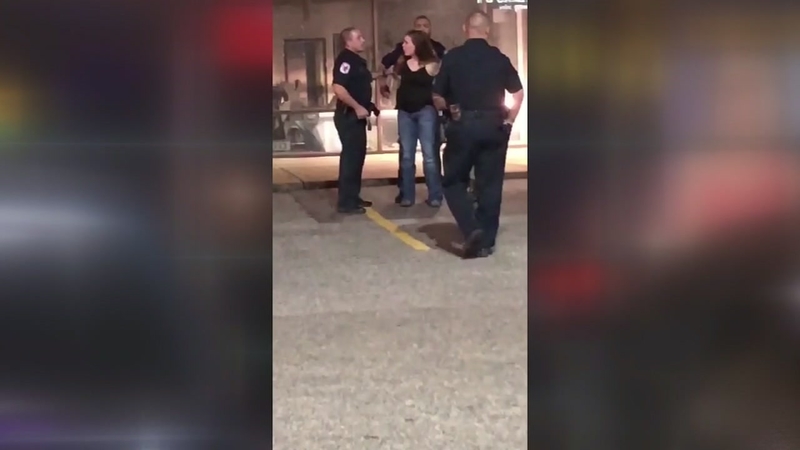 BAYTOWN, Texas (KTRK) -- A cell phone video showing a group of friends getting arrested is getting a lot of attention. Some say it went too far, but Baytown police say the people they were arresting were intoxicated and uncooperative.

It all started over a cell phone. Kyla Holder says she was trying to get her phone back from someone in the parking lot of The Chute, a sports bar in Baytown.

Kyla said the woman who had the phone said something snarky.

"When I was saying a cussword back, she goes to walk off. As soon as I said it, the cops came and they grabbed me and said, 'You're going to jail,' and I said, 'Okay. I'll leave. I'll leave and they said, 'No. No. You've had your warning,' which, I never had a warning," said Kyla Holder.

From there, Kyla said things escalated. Her friend, Ashley Serbe, tried to explain to officers what was happening when she too was arrested.

"He put my hands behind my back, put them up as high as he can, which I know they do that all the time, and grabs both of the phones out of my hand and pulls his hands up and smashes them both on the ground," said Ashley Serbe.

Then their friend, John, went to pick up the phones. He was placed in handcuffs right after.

"They take him down and whenever they did, he busts his head into the car," said Serbe.

Ashley and her friends think the police went too far.

But officers say it's what happened before the video that you don't see.

Police sent a statement saying the group appeared intoxicated and said they were very uncooperative. They said they asked Kyla to leave and she refused.
Baytown police also said Ashley, "... approached the officers and began arguing with them, using profanities and not cooperating with the officers."

As for their friend John, Baytown police said, "Officers instructed him to stop but he continued; therefore, officers attempted to take him into custody and in doing so they fell to the ground and were ultimately able to place him in handcuffs. Officers were then also able to get Ms. Serbe in custody, however she continued to be belligerent and shout obscenities."

In the end, four people were arrested. Some for public intoxication, others for disorderly conduct.

Ashley and Kyla say those charges aren't fair and they want them dropped.